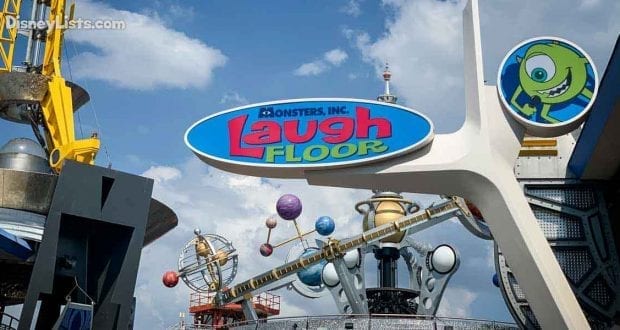 If you are in need of a good laugh, this experience definitely delivers.  This attraction is a show where you get to enjoy jokes told by monster characters and include some of the beloved characters from the Monsters Inc. universe.  Here are 8 fun facts and secrets about Monster’s Inc. Laugh Floor:

8 – The attraction replaced The Timekeeper.

The Timekeeper was an attraction in the same location prior to the opening of Monster’s Inc. Laugh Floor.  The attraction featured animatronics and Robin William’s provided voice narration for the attraction, too.  The experience was supposed to be a journey through time utilizing a time machine.  It focused on key points in history.  It was a neat attraction for its time, but it was nice to get a little bit of new life to the area and incorporate the beloved Monster’s Inc. characters into Tomorrowland.  Before Timekeeper there was the Circle Vision 360 Theater where various projections were shown.

7 – The voices are live actors.

During the show, jokes are told in a manner that is interactive with the audience.  These voices are created from real actors that are behind the screen.  The computer-generated monsters appear and move to the actors’ voices so that the experience is seamless.  This is the same technology that was also used in Turtle Talk with Crush at Epcot. 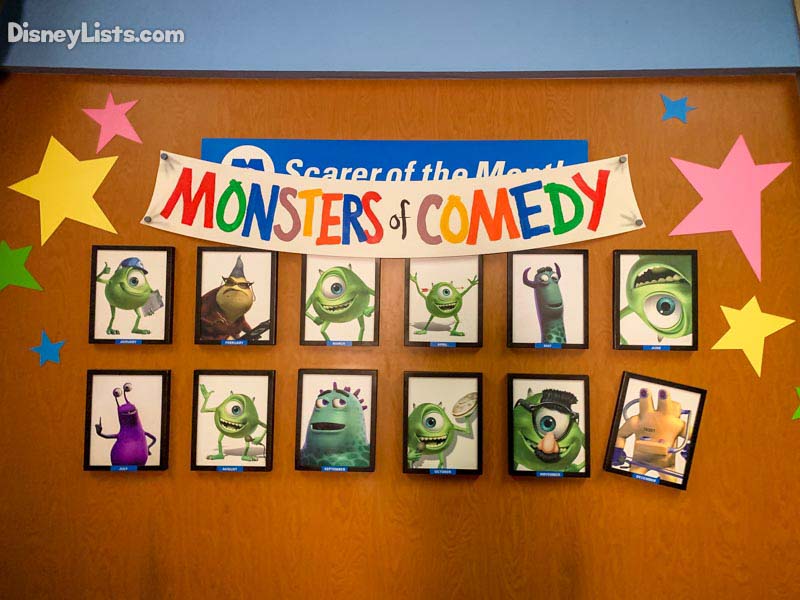 The story for the attraction is that instead of monsters coming to the human world in order to perform and get their laughter only one human at a time, that it made more sense to create a place where humans could visit the monster world and the monsters could perform and collect more laughs at a time.  During the show, they are telling jokes in order to collect your laughs.  You get to watch the laugh can fill up as the show goes on in hopes that you completely fill the canister for Mike.

5 – Your joke could get told in the show.

Pay attention to the screens when you are waiting to enter the theater for the show.  At some point, there will be information on how to text over jokes to be used in the show.  If your joke is selected it will be used during one of the segments in the show and credit will be given to the submitter.  It is your moment to get your name on the big screen!

4 – The name was changed a couple of times.

The original name for the show was planned to be “Laugh Floor Comedy Club”.  As the attraction was in development and the concept was being finalized the name was changed again to “Monster’s Inc. Laugh Floor Comedy Club”.  After further changes and the attraction was closer to opening the final name (and current name) as settled on, Monster’s Inc. Laugh Floor.  I think this name that they ended up with was the best choice of these options.

After you enter the theater and are seated, there are cameras all over the theater that are looking around for guests that they will use in the show for some of the various gags that they do.  They show pictures and put up funny jokes.  If you fall asleep during the show, you can guarantee that the audience will get to have a laugh at your expense.  There is also always someone that is selected to be “That Guy”.  Not only that, this person gets an “I was ‘That Guy’” sticker at the end of the show, too.  So pay attention to the screen to see if you or someone in your family gets chosen for one of the gags on the big screen.

2 – The attraction was nominated for an award.

Pretty cool, right?  The attraction was actually nominated for the Outstanding Visual Effects in a Special Venue Project award in 2008.  The award is issued by the Visual Effects Society.  It is really cool for the attraction to be nominated for the award and recognized for the hard work and technology that went into creating the experience.  Liz Gazzan, Joe Garlington, Roger Gould, and Daniele Colajacomo were the individuals that were called out in the award nomination.

Due to the nature of the show and the improvisation of the actors, the show is never the exact same show each time.  We love that about the show.  There isn’t usually a super long wait and when we are looking for something fun to do we know we will get a little bit different experience each time that we go and enjoy it.  We end up laughing so hard every time since the actors are quite clever with their jokes and how they include the audience in the jokes as well.