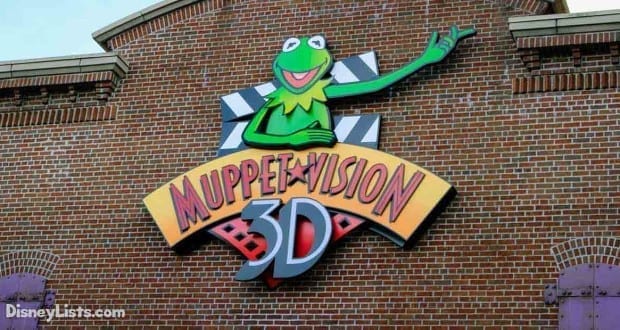 You will notice a sign that says that the crew will be back soon and that there is a key under the mat. Well, be sure to actually look under the mat, because the key is actually there. Disney is all about the details, and this is one detail that they didn’t miss. If you have kids in your group, be sure to let them find the key under the mat. It is so much fun for them and helps to make the experience very real. The Muppets have always been known for jokes and creative comedy. When you enter the lobby area where you watch the pre-show, you will notice a really cool and popular visual pun, “a net full of Jell-O.” If you say this quickly, you will see that is sounds exactly like “Annette Funicello,” who was one of the leads on the original Mickey Mouse Club. This is a really clever nod to a beloved Disney favorite from history and still keeping with the Muppets fun. There are many other puns and references like this, so read everything you can around the lobby and entrance.

After Muppet Vision 3D was created, Disney and The Jim Henson Company were set to merge in the 1990’s. The area around Muppet Vision 3D was going to include a Muppet ride and a Muppet restaurant in an area that would be “Muppet Studios.” The merger fell through after Jim Henson’s death, and so did the plans for this area of the park. In 2004 Disney did end up acquiring The Muppets, and there are rumors and speculation that some of these forgotten plans may be revived to create a larger Muppet presence in the parks.

In 2009, the attraction shut down for about a month to get a few refurbishments to help keep it more current and less dated for newer, younger guests. The first of these was an important digital update to the film. The film was remastered in Disney Digital 3D so that the film would appear clearer and crisper for guests. The pre-show area was also enhanced with digital updates. During this refurbishment, new funny spoof posters were added to the queue for the show. The posters included Pirates of the Amphibian, High School Mayhem, BEAK-E, Hammah Montana, and Wild Frogs. Be sure to check out these posters and their nod to popular Disney favorites. Do you remember the portion of the show where Sweetums comes out looking for Bean? Well, there was actually a lot of work and training that went in to ensure that Sweetums’ performance is exactly perfect. Disney brought in experts from The Jim Henson Company before the attraction first opened to train performers in how to move and act exactly like Sweetums in every way. This really is a lot of work and care put into a very small portion of the show, but a portion that is very real and brings a beloved character to life for guests and Muppets fans.

You notice the fire truck that breaks the wall in the final scene? It actually used to be parked right outside of the attraction’s exit. This helped to create the realism for the attraction for all of the guests. When the Stage One Company Store was built, it had to be removed, and there wasn’t another location to put the fire truck, so it was removed entirely.

The Statler and Waldorf animatronics are positions in the balcony seating area to the right of the theater. They make their hilarious commentary and sarcastic jokes throughout the show. At the end of the show, when the cannon goes off and does “damage” to the theater, they duck down and wave white flags as a sign of surrender. The arms with the white flags aren’t actually attached to the animatronic figures. They are attached to the inside of the symphony box, and the movement is entirely separate from the animatronic figures themselves.