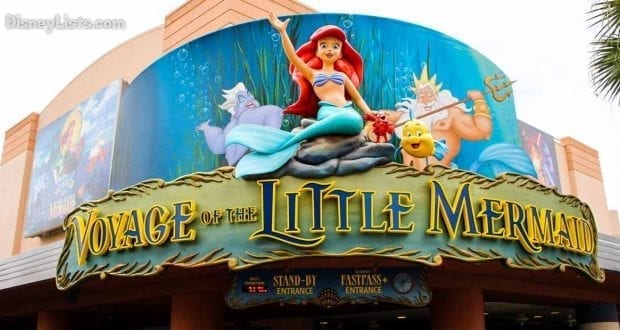 Ariel continues to remain one of the most popular princesses, beloved by girls of all ages, even though her movie was released in 1989. She is strong-minded and easy for girls to relate to. Voyage of the Little Mermaid is an excellent quick-version of the story with Broadway-quality performances and puppet work that really makes you feel like you have gone under the sea. Here are 8 great facts and secrets that you may not know about this beloved show:

8 – How the Under the Sea scene works.

The Under the Sea scene is one of the coolest parts of the entire show. The fish and sea creatures in the scene are all puppets. The actors for the puppets are wearing all black, and the puppets are illuminated via black lights so that their colors are bright and very vivid for the audience. The actors keep the various sea creatures covered until it is their time to enter on stage. This is a major reason why the announcements stress the prohibited use of flash photography. The flash is distracting and potentially dangerous for the actors, and it ruins the effect they are trying to pull off as it illuminates the actors and allows guests to see them. It is cool to know how the magic is created, but you don’t really want the effect ruined for you in the middle of the show!

Believe it or not, there are actually over 100 different puppets in the Under the Sea scene. Some actors are responsible for multiple puppets throughout the show, and some of the puppets even move together with the same controls as other puppets, but that is still an extremely impressive number of puppets to be choreographed for just one scene in the show. It makes you appreciate the scene even more!

6 – Ursula has a very large presence.

I don’t think that any of us ever thought of Ursula as small, but she is especially large in the Voyage of the Little Mermaid show. In the scene where she takes Ariel’s voice and sings her notorious song, “Poor Unfortunate Souls,” she is actually 12 feet tall and 10 feet wide! She is also a giant puppet that has actors assisting with her choreographed movements during the show. It would be really cool to see inside! Many guests have a natural tendency to try to be the first ones in the theater and push their way to the front as much as possible. This is an attraction that it doesn’t really benefit you to be the very first one in theater for. If you are the first in, you are guaranteed to sit on the very end of the theater closest to the exit. This is because as guests are filling the theater, you have to move all the way to the end of the row so that all seats can be filled. Since the show is popular, all seats usually are filled. It is usually best to let several guests get ahead of you in a particular row so that you are seated more toward the center of the theater for a better view.

One of the actresses who played Ariel when the show first opened, Leanza Cornett, actually did get crowned Miss America in 1993. She was first crowned Miss Florida in 1992 and then went on to earn the Miss America crown. Dreams really do come true!

3 – Dialogue has been removed.

When the show first opened, it used to be longer than it is today. Now it runs about 17 minutes for each show. To cut time off of the show, some of the dialogue was reduced to tighten the timeline so that a few more shows could be performed each day. The show remains popular and keeps the theater filled, so it helps more guests to be able to experience the show any given day at the park.

2 – The attraction was meant to be a temporary attraction.

It is hard to believe, but when this show was put into place, it was only meant to be an active attraction for about 18 months and then would be replaced. The show became and still remains extremely popular, so it has managed to survive all these years since it opened in January of 1992. We may see that change in the coming months or years as there are so many changes going on at Disney’s Hollywood Studios, but everything right now is just speculation and rumor. We don’t know for sure what will happen to the show, but we do know that it is possibly going to end putting the attraction on the endangered list.

1 – Voyage of the Little Mermaid replaced The Muppets.