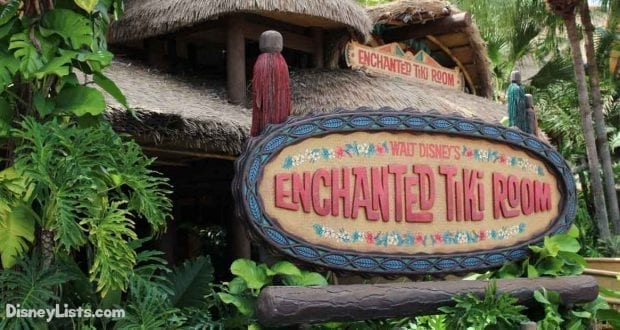 Walt Disney’s Enchanted Tiki Room still remains a classic attraction to this day that big time Disney fans have a continued amount of love and respect for.  This is likely due to the fact that Walt Disney actually worked on this attraction, which makes it extra special for all of us.  There is a lot of great history to this attraction, so here are 8 facts and secrets about Walt Disney’s Enchanted Tiki Room that you are going to love:

8 – It was the first attraction to use audio-animatronics.

Today when we think of Disney World attractions, we immediately think of the use of audio-animatronics.  This has become such a major component of the experiences and how we experience them and we don’t even remember a time before this was the case.  The Enchanted Tiki Room is actually where it all started.  The key distinction is the “audio” aspect.  Animatronics with simple movements were in use, but the birds that were created for this attraction were the first to have long series of complex movements that move in sync with the soundtrack for the attraction.  Pretty cool, right?

There are actually 150 different animatronics that are used throughout the attraction.  Many of these are birds and each of these birds have their own movements and are synced perfectly to the soundtrack.  The birds vary in their colors, breeds, sizes, etc. to give a true blend of different tropical birds you may see out in the wild.  You also have the tiki drummers, tiki gods and other animatronics that are used to complete the entire experience. 6 – We almost had a dining location.

The original concept for the attraction was that it would be a dining location where the birds would sing and entertain guests while they dined.  It was later decided that the logistics to have a complex show like this in full operation while trying to run a successful dinner service wouldn’t be very feasible.  With that the plans were adjusted for the “restaurant” to be changed to a show attraction.

5 – The Sherman brothers were at it again.

The iconic title song from the show that goes like this, “In the tiki, tiki, tiki, tiki, tiki room,” was another Sherman brothers original.  These brothers worked directly with Walt Disney on many different songs for movies and attractions, including some of Walt’s favorite songs, so it is no surprise that they were behind the title song for this attraction, too!

4 – At Disneyland, this was the first building to have air conditioning.

The guests in the California heat may have wanted to believe that this was just Disney’s way of providing them with a nice break from the heat, but the actual reason why the building was air conditioned was to ensure that the computers and technology that ran the show didn’t overheat.  They were cutting edge and very expensive for their time, so protecting them was definitely critical.  The break from the heat just also provided an additional benefit to guest satisfaction.

3 – The Tiki Room was put “Under New Management”. It is very true that Iago caught on fire during a performance in January 2011.  The sprinkler came on and did damage to many of the birds in the process.  Iago was reported as being completely ruined in the incident.  It seems that this was likely the catalyst for changing back to the original version of the attraction and Disney took the opportunity to restore the iconic attraction to its former glory.  Maybe the gods finally took their revenge on Iago during the show… I guess we will never know.  The other good news is that no guests were harmed during the incident.

1 – Walt had a major role in this attraction.

Walt was the driver for the attraction and provided a lot of creative input.  The attraction was thought up not long after Hawaii had become a state.  Walt was extremely interested in anything with a tropical island theme.  Even more interestingly, Walt developed the attraction under his own company, WED Enterprises, rather than the Walt Disney Company, which owned and operated the rest of Disneyland. Guests were charged an additional 75 cents to see the show when it opened, and it still became an instant success and immensely popular at the park!