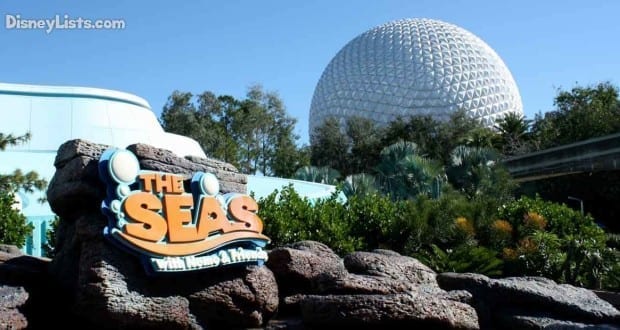 8 Facts and Secrets About Future World in Disney’s Epcot

Future World at Epcot is home to several different pavilions that provide educational opportunities and fun experiences to families with members of all ages.  There are hands-on components as well as rides, shows, and other attractions.  There are a lot of great facts, secrets, and history in this area of Epcot, too!  Here are 8 of my favorite facts and secrets about Future World:

Most guests only think of the Magic Kingdom when they think of tunnel systems under the parks.  There are actually tunnels in the Future World area of Epcot, too.  They do only run in certain sections under Future World and are used to transport trash, merchandise, supplies, etc. to different locations so that carts don’t have to move in onstage areas that would disrupt the guest experience.

7 – You won’t get wet under Spaceship Earth.

If it is raining, standing under Spaceship Earth is actually a safe place to stand!  You might think that the water would run down the sides and get guests underneath it wet, but the structure was actually built to include a drainage system that routes the water to where it is collected and routed to the lagoon at the World Showcase so the water is repurposed there.  This is amazing how they did this and the thought that was put into it. 6 – Home to the longest and fastest attraction in Walt Disney World.

Test Track is an extremely popular attraction that maintains high wait times consistently.  FastPass+ options are also usually gone quickly and are difficult to get on the same day.  Some of this may be related to the fact that Test Track is not only a really fun attraction, but it is also the longest and fastest ride in all of Walt Disney World.  The ride track is 4,286 feet long, which makes for a nice long ride.  During the ending of the ride when the car takes off, it reaches a speed of 65 miles per hour, which is the fastest of any attraction, including the roller coasters.

5 – Spaceship Earth can fully fit inside the Seas.

So when you look at Spaceship Earth, you think it is quite large, right? Well, that is because it is!  It is about 180 feet tall and weighs about 16 million pounds!  Well now imagine this huge structure being placed inside of the tank at the Seas pavilion.  Sounds crazy, right?  Well, it is true! The tank is so large that Spaceship Earth could fit completely inside!  That will definitely make you look at the Seas pavilion differently the next time you are there!  It the second largest aquarium in the United States, too!

When you are at the Land pavilion and take the Living With the Land boat ride, you will get to see a ton of different fresh produce that is grown at the pavilion.  These produce areas aren’t just for show, and they certainly aren’t fake.  The produce that is grown here is actually used at the various resorts all over Walt Disney World Resort.  Of the food that is produced over an average year, about 30 tons of the fruits and vegetables are grown right from the Land and then used to create the delicious meals that we love.  Produce that we get to enjoy at Disney restaurants really is amazingly fresh!

The Seas pavilion is extremely impressive, and not just because Spaceship Earth can fit inside.  The pavilion is home to about 3,000 different sea inhabitants.  They live in the 5.7 million gallons of water that fill the tank.  There are 56 giant windows that allow guests to get a look at these inhabitants and the beautiful coral that was built in the tank.  When the tank was filled with water, it took just the right ratio of salt in order to make the saltwater that the fish needed in order to survive and live in the environment.  The recipe to make the saltwater required that 27 truckloads of salt had to be delivered and added to the water.  That is a LOT of salt!!! Look for the huge tomato tree at the Land pavilion while on the Living With the Land boat ride.  This tree is a real Guinness World Record holder for the amount of produce that was generated from the one tree over an entire year.  The tree generated a yield of 32,000 tomatoes!  The total weight generated was 1,151 pounds!  That is a lot of tomatoes from a single tree!  Disney is constantly conducting research and working on ways to improve yield and the way that we grow produce to help ensure we can always grow the quantity of food that we need to supply the world with food.  This is proof that something they are doing is right!

1 – Soarin’ was an erector set model.

The beloved and extremely popular attraction, Soarin’ Around the World), always has usually has a long wait.  It is one of the most popular attractions in all of Walt Disney World and we expect that popularity to be maintained over the coming years. Believe it or not, the original model for the attraction was built by Imagineer Mark Sumner using an erector set.  The erector set was used as a proof of concept for the support of the weight for the ride machine.  The attraction has a base that is made from one million pounds of steel.  This base lifts the ride structure each structure, which weighs in at around 37 tons each time.  Very impressive!