Maybe you’ve heard about Disney World’s Animal Kingdom Theme Park, but just really don’t know much about it. Well, here’s a little guide that will help you better understand Animal Kingdom and all of its’ spectacular opportunities!

Animal Kingdom is divided into 7 very distinct areas, which include the Oasis, Discovery Island, DinoLand U.S.A., Asia, Africa, Rafiki’s Planet Watch, as well as Pandora-The World of Avatar. As you enter each section of the park, you are immediately greeted with atmosphere changes from the scenery, sounds, sights, and even smells! No one area is like the other, making each experience unique. Exploring the highlights of Animal Kingdom in one day is possible, but it seems like even though we’ve gone numerous times, we are always finding something new, which makes this park one of our favorites to explore. 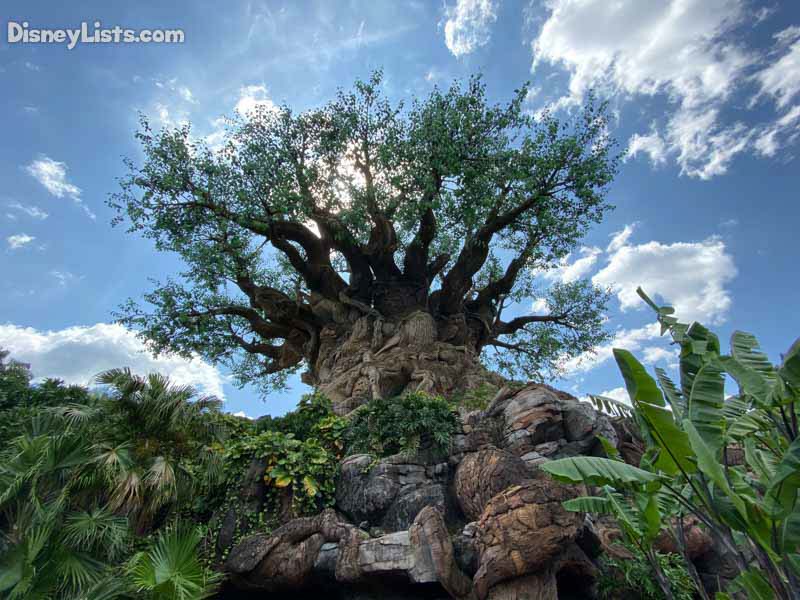 If there is one thing most people know about Animal Kingdom, it is the Tree of Life. Standing 145-feet tall and 50-feet wide, this artificial (yet life-like) tree is undoubtedly the icon that represents Animal Kingdom. The Tree of Life boasts over 300 animal carvings and a winding path called Discovery Island Trails for guests interested in encountering the tree up close. Much like Epcot’s Spaceship Earth, the Tree of Life also has a fun attraction inside called “It’s Tough to be a Bug.” It’s an excellent experience to see the Tree of Life at different angles throughout the park as you have the chance to try to see how many carved animals you can spot on the tree’s trunk.

What would an animal-themed theme park be without a plethora of animals? With around 1700 animals at Animal Kingdom, you’re sure to find your favorite animal while adventuring through the park. Birds, snakes, insects, tigers, lions, giraffes, apes, gorillas, elephants, hippopotamus, and SO many more! Cast Members are also on hand to provide informative information about the animals and their habitat. With walking trails, safari rides, viewing spots, and petting areas, animal encounters are around every curve at Animal Kingdom!

Whether you want to watch a live, Broadway-style show (The Lion King), dance in the streets of Africa (Tam Tam Drummers of Harambe), take a bumpy ride and encounter animals (Kilimanjaro Safaris), face your Yeti fears (Expedition Everest), check out the Jurassic period (DINOSAUR), explore the wonders of animal and nature conservation (Rafiki’s Planet Watch), or even meet Pocahantas – Animal Kingdom has something for everyone! Entertainment, attractions, characters… the options seem endless at Animal Kingdom.

It’s easy to find grab and go tasty treats and snacks, or even full-on award-winning meals at Animal Kingdom. Kiosks, stands, lounges, quick service, table service, and even character dining restaurants are available at Animal Kingdom. Plus, as you browse each section of the parks, the flavors change slightly to match that location’s cuisine. So, don’t fill up in one spot but instead be prepared to taste some delightful dishes throughout your visit to Animal Kingdom.

The land, the most significant expansion in the history of Disney’s Animal Kingdom, is based on Oscar-winning filmmaker James Cameron’s record-breaking box-office hit, Avatar, which was released in 2009. The land is a fantastic spectacle of Disney Imagineering, creativity, and story-telling. As you explore the vibrant terrain sprawling beneath mountains that appear to float in the sky, you’ll see waterfalls cascading down the mountainside into meandering streams and pools. Then you’ll discover two thrilling expeditions: Avatar Flight of Passage and Na’vi River Journey. Grab a bite to eat at the quick-service restaurant, Satu’li Canteen, or grab a drink and snack at Pongu Pongu. There are so many amazing things to explore. Visiting Pandora an absolute must-do on your trip to Disney’s Animal Kingdom.

We are Disney nerds. Two kids at heart who love the magic and the memories of Walt Disney World! We follow all things Disney and have great experiences with being Annual Passholders, Disney Vacation Club Members, and RunDisney participants. We enjoy the vacations, day trips, weekend getaways and geek out over the planning of such events. From lodging to dining to Fastpasses we have a spreadsheet for every occasion. Mike’s frivolous Disney goal is to acquire as many MagicBands as possible while Jamie’s goal is to experience as many Disney desserts as possible. Usually there isn’t a day that passes without some discussion of the master plan of our next trip to the happiest place on earth. Most people think we’re normal – until they travel to Disney with us. We have been married for 13 years and are blessed with two children - our 8-year-old daughter and soon to be 2-year-old son. As a family we thoroughly enjoy the magic and the memories at Walt Disney World and are here to help others experience the magic as well.
Disneylists.com Newsletter
Follow us on Facebook
Find us on Facebook
Follow Us on Instagram
Unsupported get request. Follow Us on Instagram
DisneyList Tested and Approved Travel Partner