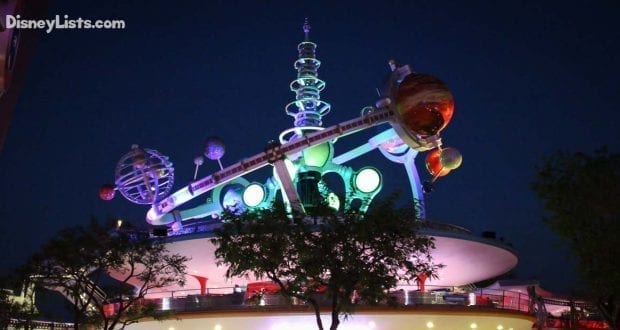 You can’t miss the Astro Orbiter when you enter Tomorrowland at the Magic Kingdom, you just may not at first realize that it is an actual attraction.  The attraction is on top of the loading area for the PeopleMover and perfectly fits in with the theme for the entire land.  It is an attraction very similar to the Dumbo ride or Aladdin’s Magic Carpets, but has a few different components that these don’t have. Here are 10 facts and secrets about Astro Orbiter:

When you wait in line for this attraction, the line forms on the ground.  Then you are taken on an elevator up 2 stories, above the loading area for the People Mover, to get into a shorter queue to board the attraction from very high up.  It puts you very high up and among the highest points in Tomorrowland while you enjoy the attraction.

The ride first opened at the Magic Kingdom in Tomorrowland on November 28, 1974.  The location has never changed and the attraction hasn’t been moved since the time that it first opened.  Other than name and color changes it has mostly remained the exact same attraction.

8 – The ride has changed its name and colors over the years.

Then attraction first opened, it was called StarJets.  It kept this name for many years.  In April of 1994, the attraction reopened after a refurbishment which included repainting and refreshing the attraction.  The repainting was necessary to match refurbishments and changes within Tomorrowland in general so that everything matched and looked to fit in place.  When the attraction re-opened in 1994 it was then known as the Astro Orbiter and continues to maintain that name today. 7 – The focal point for the ride also changed.

When the ride was known as StarJets the focal point at the center of the attraction was the Saturn V rocket.  When all of the refurbishments were completed the focal point was changed to clusters of planets floating around to help give the feeling of flying through space.

The ride vehicles on StarJets were designed to be miniature replicas modeled after the Apollo-Saturn rockets, which tied in perfectly into the original focal point of the attraction.  The ride vehicles aren’t as well tied into the theme anymore and look just more like generic rockets for your journey through the solar system.

The ride rotates in a circle high up in the sky.  The speed for the attraction is 11 rotations for per minute.  That means that it completes one full rotation in less than 6 seconds.  It feels even faster than that when you are on the attraction, too!

4 – The attractions earns a lot of miles.

If only these miles were able to be used as airline points!  The attraction operates all day every day, except during inclement weather that would result in the ride shutting down. This means that the attraction rotates an average of around 1.2 million miles in a single year.  That is a lot of miles spent rotating in a circle over and over again!

3 – The attraction started at Disneyland in California.

This same attraction first opened at Disneyland in 1956.  It was known as AstroJets then.  It had a name change to Tomorrowland Jets and then also made the name change to Astro Orbiter in 1997 to match the Magic Kingdom’s name change and re-theming that was completed in 1994.

2 – The ride vehicles are awkward to get in and out of.

1 – You will see some of the most amazing views.

You are circulating at one of the highest points in Tomorrowland while you are on the attraction.  This helps to give you the best views of the entire Magic Kingdom, as well as views of The Contemporary and other areas that are close by.  I recommend experiencing the attraction at day and then again at night.  They are two very different experiences and you will get very different views for each one!  We love the way the park is lit up at night!  It is so beautiful!