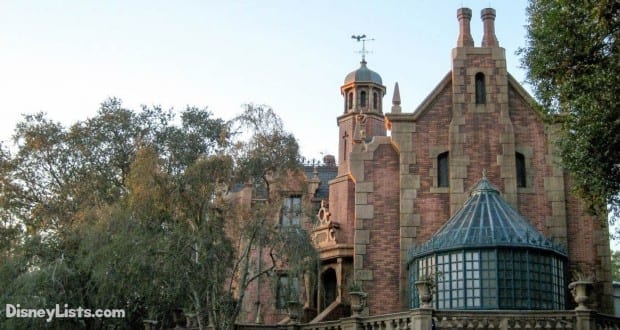 Posted by: Cindy E. Nykamp in Magic Kingdom, The Parks

Of all the rides at Disney World, few are more iconic than the Haunted Mansion. It is simply the best haunted house attraction in the world. While this ride should be approached with caution when it comes to young children, rest assured that this is not a horror house. The haunting is combined with some good humor, and most people find it pleasantly entertaining rather than frightening. The fun begins when you step into line and continues out past the exit. With so many different parts of this ride, amazing effects and subtle jokes, there is a lot to love. Every visit brings new discoveries. Here are some things you may not know about this classic attraction.

You may not mind waiting in this attraction’s ride queue because there is so much to see! You’ll discover a musical crypt. Tap any of the embossed musical instruments on the crypt to hear a haunted tune mysteriously play. Check out the tomb of the Sepulcher of the Sea Captain, which leaks water and bubbles rise as the Captain sings a long-lost tune. On the tomb of Posthumous Poetess, words inexplicably appear! Finally, in the Secret Library push in the books that mysteriously pop out at this haunted bookcase. Lots of fun surprises await in this line so you may want to take a long way. Of course, don’t miss the tombs to your left just before you enter the Mansion. Be on the lookout for some spooky sights and some laughs as well. The highlight of the graveyard is the Madame Leota tombstone. A tribute to Disney Costumer Leota Toombs (what a great name!) who portrayed the spiritual medium Madame Leota in the séance scene, this headstone might surprise you if you look carefully. Toombs was honored with this unique tombstone in 2001. Interestingly, the names on the other tombstones are those of Disney Imagineers who helped create the Haunted Mansion. Marc Davis (Grandpa Mark), Fred Joerger (Good Old Fred) and Yale Gracey (Master Gracey) are all Imagineers who left their mark on the attraction. Editor’s Note: During the phased reopening of Walt Disney World, to avoid a large crowd gathering, guests simply walk through the stretching room to get to the attraction.

The ride portion of the Haunted Mansion is preceded by the famous Stretching Room where you are introduced to your Ghost Host. Is this room actually stretching? At Disney World, the answer is actually sort of. In the original Haunted Mansion at Disneyland, the stretching room as born of necessity. The actual ride is housed in a building on the other side of the railroad tracks. The California Stretching Room is actually an elevator that moves guests from the entrance to the lower level below the tracks. In the Disney World version, the ride itself is housed in a hidden building directly behind the facade you see from the queue area well within the Magic Kingdom Railroad tracks. Since there is no need for an elevator (unlike at Disneyland), the ceiling just goes up! But that’s okay because the stretching room is fantastic and it just wouldn’t be right without it.

Can you imagine visiting the Haunted Mansion without hearing the spooky, yet merry theme song, “Grim Grinning Ghosts?” Neither can I. The success of the theme song, “Yo Ho Yo Ho (A Pirate’s Life for Me), at Pirates of the Caribbean, was the driving force behind creating another compelling tune for the Haunted Mansion attraction. Buddy Baker and X. Atencio wrote the song, while voice actor Thurl Ravenscroft sang for the track. Thurl’s quartet, The Mellomen, contributed harmony to “Grim Grinning Ghosts.”  Buddy Baker, X. Antencio and Thurl Ravenscroft have all been named Disney Legends in years past for their contributions to Disney Parks and films.

The Haunted Mansion is based on 19th century Hudson River Dutch Gothic architecture. This architecture makes sense since it resides just beyond the burgeoning harbor town of Liberty Square. Since this home was abandoned, it has become home to 999 specters. Though there is room for 1000 if you’d like to volunteer. You’ll be delighted to meet your, Ghost Host, who is your helpful guide through the 15 rooms that are waiting to be explored. Paul Frees, the voice of the Ghost Host, also provided voices for Ludwig Von Drake, Boris Badenov, the Pillsbury Doughboy and many of the Pirates of the Caribbean, including the famous Auctioneer. Madame Leota, the disembodied head inside the crystal ball, is the voice of Eleanor Audley, who also provided the voices of Maleficent in Sleeping Beauty and the Wicked Stepmother in Cinderella.

A trick that has been around since the early 1800s creates the dancing ghosts in the ballroom scene. The trick, called the Pepper’s Ghost illusion, is where illuminated objects are reflected onto a pane of glass, making them appear translucent. The ghosts are images of real animatronics, which are hidden out of sight just below and above the ride vehicle track. “Grim Grinning Ghosts” comes alive in the graveyard scene, where a set of singing busts will “shriek and harmonize.” Each of the busts has a name. They are Rollo Rumkin, Uncle Theodore, Cousin Algernon, Ned Nub, and Phineas P. Pock. The face of singer Thurl Ravenscroft appears on one of the singing busts – Uncle Theodore, which at Disney World is the “broken” bust.

The Mansions in Disneyland, Disney World, and Tokyo Disneyland all have their own Brides, and she is a central character in the Phantom Manor at Disneyland Paris. The Disney World Bride was recently updated into a more ominous, hatchet-wielding figure named Constance, who speaks grim twists on traditional wedding vows. Portraits of her in the attic show Constance and her ill-fated husbands, whose heads disappear from the portraits before your very eyes. One of the most popular scenes in the Haunted Mansion comes at the end when your Doom Buggy gets one of three additional passengers that are sure to follow you home. The original effect was kind of a “Pepper’s Ghost” in reverse since you’re seeing the real animatronic figure sitting next to your reflection in the glass. Recently, the sequence has been upgraded — the ghosts now move around and interact with guests from either inside or atop the Doom Buggies.

On your way out don’t miss the pet cemetery on your left. Look way in the back for a newer addition to the gravestones: Mr. Toad. The Disney World version of Mr. Toad’s Wild Ride was closed and reworked into the Many Adventures of Winnie the Pooh, so the repurposed Toad figure is a tribute to a lost ride.

This is such a rich ride experience with so many things to see, you can spot something new every time you ride it. What’s your favorite part of the Haunted Mansion!