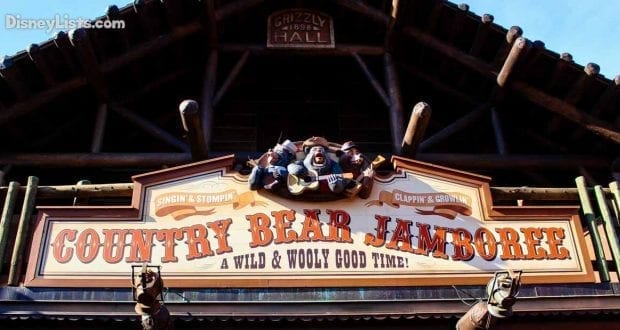 The Country Bear Jamboree is a classic attraction at the Magic Kingdom, located in Frontierland.  The loveable bears also make appearances in the area where they take pictures and interact with guests, too.  It often has no wait time today, and many guests don’t know the history to appreciate the attraction to its fullest.  Here are 8 great facts and secrets about this original attraction:

8 – This was one the last attractions that Walt actually reviewed and worked on.

7 – The attraction used to convert to a Christmas show.

I REALLY wish that they would bring back the Christmas show, being that I am obsessed with all things Christmas!  The Country Bears were once extremely popular, so the imagineers created a Christmas show where all Christmas songs were performed and the bears had Christmas outfits and props for the show. The attraction only ran at the Magic Kingdom from 1984 through 2006. One can only hope that we might see it return one day! 5 – The show originally had a sponsor.

For the first 10 years that the show ran, it was sponsored by Pepsi and Frito Lay.  There was a nod to Pepsi in the show audio when Henry would say, “Just refrain from hibernating, and we’ll all enjoy the show.  Because we got a lot to give.”  This was from part of Pepsi’s old slogan, “Pepsi’s got a lot to give.”  This line actually wasn’t removed from the attraction until 2012, even though the sponsorship ended in the 90’s.  The audio was changed when the attraction received a refurbishment.

4 – The attraction was intended to be at a ski resort.

Walt Disney had announced plans to create a ski resort that would house the Country Bears attraction and many other activities and attractions at the ski resort that would be in California’s Sequoia National Park.  He officially announced the plans on September 19, 1966.  Sadly, Walt Disney passed away on December 15, 1966 and the ski resort was never built.  The imagineers kept the Country Bears attraction alive and it was added to the Magic Kingdom.

There wasn’t just a Christmas overlay for the attraction, there was also a summer vacation themed overlay where the bears were changed over to wearing bathing suits and other vacation-type attire.  The songs were more summer and fun inspired than the original playlist of songs.  This show is now longer performed at Walt Disney World, but you can still see it at Tokyo Disneyland if you are up for a vacation hoedown!

Country Bear Jamboree was one of the opening day attractions on October 1, 1971 when the Magic Kingdom first opened its doors to greet and entertain guests.  It was an original attraction for Disney and one of the few transactions in Frontierland for guests to enjoy.  It was also an E-ticket attraction for that time.  It has remained in operation ever since, excluding when it has been down for refurbishments.

1 – The attraction was shortened.

During the major refurbishment in 2012, the attraction was shortened in length.  It used to run around 16 minutes, and went down to 11 minutes.  They were able to decrease the run time for the attraction by removing a couple of songs.  “Pretty Little Devilish Mary” and “Fractured Folk Song” were the songs that were cut from the original lineup.