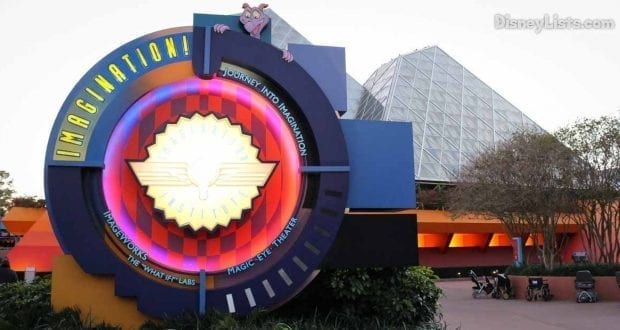 Figment is arguably one of the most beloved attractions and characters across Walt Disney World, and definitely at the top in all of Epcot. This attraction has had a few different renovations, and there are rumors that another one may be on the horizon. If you are Figment lovers like we are, you will love these 8 facts and secrets about Journey Into Imagination with Figment:

8 – The storyline for the attraction was completely different when it opened (twice).

This attraction has actually held 3 different storylines during the life of that attraction. When it first opened, it featured Dreamfinder and Figment. The ride was then made up of 10 scenes where Figment was learning to use his imagination throughout each scene. This version became an instant fan-favorite. When Honey I Shrunk the Audience came to the pavilion, they took the attraction a little different direction where Nigel Channing was hosting an “open house” at the Imagination Institute. The version we know today is a little different direction on the “open house” where Figment takes over the tour and teaches us that imagination should be set free.

7 – Dreamfinder and Figment were fan favorites and used to do meet and greets with guests.

Guests couldn’t get enough of Dreamfinder and Figment. Dreamfinder wore “steampunk” attire and would carry Figment with him to take photos and interact with guests in the park. This was an extremely popular meet and greet. We would absolutely love it if they would do a limited-time magic even and bring them back for a visit! One of the Imagineers that worked on the original attraction absolutely loved dragons, which became the inspiration for why Figment became a dragon. When you think of a dragon, you may think of green as the first color choice. Since Kodak was sponsoring the ride, they wouldn’t want green as the color for the main character since that is the primary color for Fuji Film. Purple was decided on as the color for Figment and wouldn’t have any brand interference.

5 – Figment was one of the first characters created exclusively for a theme park.

At the time Figment was created, he was one of the first characters ever to be created exclusively for a theme park attraction. The even more amazing thing about this is that he quickly became a beloved and notorious character that had his own line of souvenirs and Disney products, and also became the lead spokes-character for the entire Epcot park! It was amazing just how popular he became and still is with many Disney fans.

4 – “One Little Spark” was written by the Sherman brothers.

The very popular song for this attraction was written by the very famous Sherman brothers! They have written many Disney classics and were favorites of Walt Disney himself, who they worked very closely with Walt when he was still alive. The tune is incredibly catchy and will have you humming it as you walk around the park during the rest of the day.

3 – Figment and “One Little Spark” were removed from the attraction at one time. 2 – There are “secret” bathrooms to the right of the entry to the attraction.

One of the best bathrooms in all of Epcot is right next to the attraction. As you approach the entry to the attraction, go to the right and keep walking around to the back. The bathrooms are great because many people don’t even know that they are there, so you almost never have a lot of people there. The music in the bathrooms is also really fun. If you need a pit stop, this is definitely the one to wait for!

1 – There are some really cool hidden Mickey’s!

Any fellow hidden Mickey hunters out there? In the “sight” room, look at the dry erase board. You will see a Mickey head on the dry erase board. Also, pay attention to the headphones on the table in the same room, and you will notice that there are Mickey ears on the headphones. When you are in one of the final scenes after the big “blast,” look at the “A” in “Action.” You will notice a Mickey head in the snow capping the “A.”