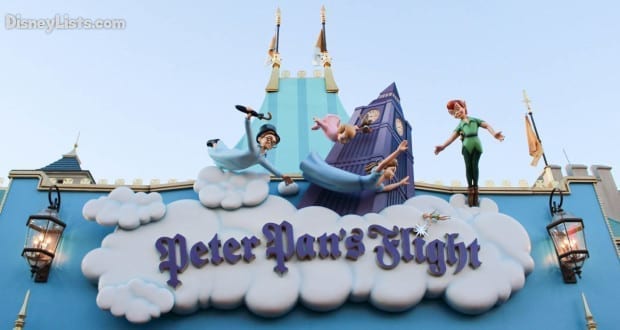 We all love the story of Peter Pan and can all understand the appeal of a world like Neverland where we never have to grow up.  For many of us Disney World as a whole creates as close to a Neverland experience as we could ever hope to get.  The imagineers really did an amazing job of bringing this story to life for us, especially given how old the attraction is!  Here are 8 fun facts and secrets about Peter Pan’s Flight:

8 – It is one of the very first Disney attractions.

This attraction has been around since the very beginning. The attraction was one of the original attractions that guests first rode on when Disneyland opened. It has been a beloved attraction ever since, which is why it was added to the Magic Kingdom. It actually now lives in 4 different Disney theme parks all around the world and maintains popularity at all of them!

7 – The ride operates on an Omni-mover.

The Omni-mover system is very popular across many of the Disney attractions. This system allows ride vehicles to be continually moving, so they are loaded and unloaded while they are still moving, using moving ramps to load and unload them. This makes the unloading and loading process much easier and more efficient, and typically quicker. The ride can be slowed down or completely stopped to allow guests with disabilities the ability to board the attraction.

6 – The ride makes use of forced perspective, so you feel higher up.

When you are flying over various scenes, especially when you are flying over London, you will notice that you feel like you are much higher up than you actually are. The ride vehicles only take you around 17 feet in the air, but you feel much higher due to the use of forced perspective. The forced perspective is used in the way the buildings and scenery are constructed so that you look higher than you actually are. This is the technique that was used in the creation of Cinderella’s Castle so that it looks much taller than it actually is.

5 – The line queue has been enhanced.

The ride is extremely popular, so Disney wanted to give guests a little bit better wait experience while they are in line. The ride queue has portions that have been moved indoors, so you are out of the sun and get air conditioning. The queue also has interactive elements with shadows and reactions to the shadows. There are also other little games to play with and be marveled at while you wait. Don’t forget to look around at the décor and other details, as it is really is need to be immersed in the experience before you even get on the attraction.

4 – The blocks in the nursery spell “DISNEY”.

Pay special attention during the nursery scene at the blocks. They actually spell “DISNEY” as a nod to the main man himself! I love these little not-so-hidden secrets!

2 – You can expect it to have some of the longest wait times, consistently.

It would be unusual for this attraction not to have at least a 45 minute (or much longer) wait at all times throughout the day. This attraction rarely has a low wait time, and the Fast Passes go quickly. You will either want to get Fast Passes as early as you can, or plan that you may be waiting a while for this one. It is probably the longest consistent wait time in all of Walt Disney World for a slow-moving attraction that definitely isn’t considered a thrill ride.

1 – The “cars” in the scene where you fly over London.

Have you noticed the cars on the streets when you fly over London? Well, those “cars” actually have glow in the dark paint drops that have been added to a bicycle chain and placed in the scene! This is such a simple, yet excellent way to add the element to the attraction and help create the effect.