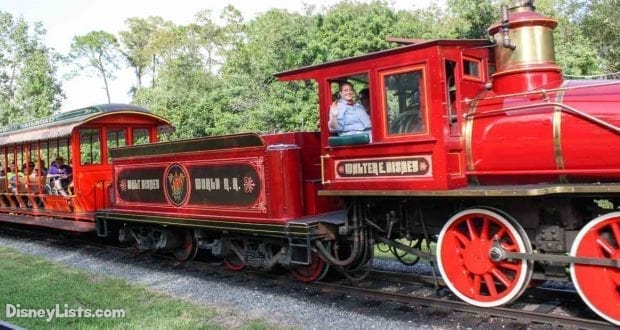 10 Things We Love About the Walt Disney World Railroad

Posted by: D.W. Noonan in Magic Kingdom, The Parks

A telltale sign that you’ve arrived at the Magic Kingdom is the Walt Disney World Railroad. Right after passing through security and the gates, you encounter the Main Street, U.S.A. station. It isn’t just a place to hold the welcome show that starts every day at this theme park. The railroad itself stands as a cornerstone experience for the visitors to Magic Kingdom. To prove our point, we present these ten things that we love about the Walt Disney World Railroad.

Editor’s Note: The Walt Disney World Railroad is temporarily closed due to Tron Lightcycle Run construction in Tomorrowland. The railroad will reopen.

Let’s face it…when you’ve just finished riding Dumbo the Flying Elephant with your little one, and you need to meet the rest of your family at the front of the park to see Happily Ever After, you may find the journey daunting. Certainly, the prospect of weaving in and out of crowds, avoiding roped-off parade routes, and dragging kids by the hand doesn’t appeal to parents after a long day at Magic Kingdom. That’s why we love the railroad, a practical transportation alternative between Frontierland, Fantasyland, and Main Street, U.S.A. Anytime you want to get around the park, just pick a station and wait; a train will come around every four to ten minutes.

Not only does the railroad offer easy transportation around Magic Kingdom, but also some respite from the crowds, the heat, the wet weather, and the excitement of attractions and shows. Everyone, especially children, needs a break from time to time to avoid exhaustion. Also, feet grow sore and sprout blisters when you’re at Walt Disney World, therefore giving you another reason to welcome the site of a train station. 8 – The Tour of Magic Kingdom

If you have never been to Magic Kingdom, or your last visit occurred years ago, then you’ll surely love the railroad tour. The ride affords you a sample of the different “lands” as it transports you around the perimeter of the park. Fans of the railroad often hop on the train at Main Street, U.S.A. right after entering the park and ride all the way around, disembarking right where they boarded and completing what is called The Grand Circle Tour. These passengers look to see what has changed since their last visit and try to steal glances of the new projects Disney Imagineers are building around the park.

During the tour around Magic Kingdom, the Walt Disney Railroad broadcasts a narration explaining each of the thematic lands and highlighting select attractions. Diehard railroad fans love listening for changes in the narration as if they’re panning for gold. The attraction updates the recording from time to time to reflect changes in the theme park. In addition to the tour narration, the soundtrack also addresses a bit about the train and its history. The narrator’s references to the railroad’s history conjures up some “good, old-fashioned feelings”; he even labels the attraction and himself as “old-fashioned.” Older passengers may feel nostalgic about days when trains were popular, and young ones can experience a slice of history in the process. These feelings stir up the imagination about the past and may encourage conversations with the kids about the impact the railroad system had on the settlement and industrialization of our nation. Also, the trains of the Walt Disney Railroad were built between 1916 and 1928, so they actually are a piece of history.

The journey around the park cuts through the rich flora of Central Florida, where Disney landscapers ensure that a wide variety of plant life beautifies the scenery. To the left of the train, the park’s landscaping crews allow most plants to grow wild, only cutting back vegetation that crowds the tracks for safety reasons. To the right, they meticulously groom much of the property. The train ride gives passengers a chance to leave the crowded asphalt and concrete pathways, the numerous buildings, and the long attraction lines in order to breathe in the freshness of nature and view the lush colors of the countryside.

No, the train whistle is not a recording. Disney fans love that these trains burn real fuel to create real steam that powers their engines. The steam also powers the whistle, which you can tell from the large plume that shoots out of the top of the engine each time the engineer pulls on the cord. If you’re lucky, you may ride the train when it’s time to refill the tank at a water tower. Though some passengers may not appreciate the wait, train fans will absolutely love the lesson provided by a cast member while the refilling and maintenance take place. The maintenance stops and the sound of the whistle may annoy a few park guests, but we love them because they remind us that we’re experiencing a real, steam-powered train, not just another theme park imitation.

Visitors from around the world travel to Walt Disney World to experience the resort’s incredible theming. The railroad at Magic Kingdom contributes to theming, as well. Not only do we enjoy the narrator’s explanation of the themes of each of the lands, but we also love the scenes and accents that we spot along the train route. For example, the three stations directly reflect the lands in which they appear. Main Street, U.S.A.’s station appears like something you would see in a small Midwestern town in the early 1900s, Frontierland’s like something in a backwoods, mining town, and Fantasyland’s like something on a circus route (à la Dumbo). You’ll also notice other thematic décor, such as the dear, the Native American village, and the buildings behind select attractions along the route. All the theming occurs smoothly and seamlessly, just as Walt envisioned when he conceived the idea of Walt Disney World.

Another aspect of the Walt Disney Railroad that we appreciate concerns Walt’s adoration of trains. Somehow, by experiencing the wonder of the trains at this attraction, we connect to the passion and inspiration of Walt Disney himself. A lot of important things in Walt’s life occurred around trains. He created Mickey Mouse while riding a train back from New York. The small, backyard railroad that he built on his property inspired him about Disneyland, which later led to the creation of Walt Disney World. The fact that the trains at Magic Kingdom are named after Walt and the people he loved should indicate just how important they were for him.

Lastly, we love the trains for the opportunities they provide for us to fellowship with our families. Walt experienced this family fellowship around his home train, the Lilly Belle, and even invited the families of friends and associates to participate. Many park guests share memorable conversations and experiences as they ride the Walt Disney World Railroad since it gives them a chance to back away from the busyness and connect with each other. For this reason, we make the train rides an essential part of every Disney vacation, not just an arbitrary addition of an item to check off our to-do list.