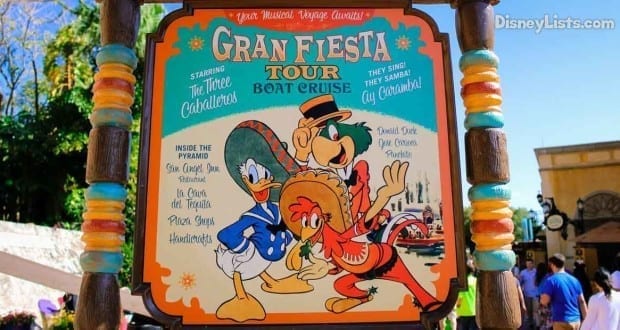 The relaxing boat ride at the Mexico pavilion, known as Gran Fiesta Tour Starring the Three Caballeros, actually has a pretty neat backstory and history behind it.  It may not be the most thrilling or exciting attraction at Epcot, but it is definitely unique and has several neat facts and secrets.  Here are 7 of these fun facts and secrets about Gran Fiesta Tour:

The attraction incorporates a story that helps give you education and exposure to popular sights and experiences within Mexico while incorporating the Three Caballeros into the mix. The attraction is based on the 1944 Disney movie, The Three Caballeros. This edition of the beloved cartoon characters also helps to engage kids in the attraction and make it a little more fun for them. Panchito and Jose spend most of the attraction looking for Donald Duck so that they can make sure he is ready for the concert that they will be putting on in Mexico City. Spoiler: they do find the crazy, loveable Donald Duck, and you will get the opportunity to see him all over Mexico!

6 – This wasn’t the original attraction at the pavilion.

Gran Fiesta Tour Starring, the Three Caballeros, wasn’t the original attraction that was at the pavilion when it first opened. The attraction that we know today replaced El Rio Del Tiempo. Most of the settings from El Rio Del Tiempo were reused to create the same attraction, but the original version of the attraction did not include the characters from The Three Caballeros. The attraction was a ride through of Mexico’s history and utilized a lot of animatronics of Mexican children. The ride was changed over to the current version in 2007 and hasn’t had a significant story change since then. 5 – The ride was originally going to have outside portions.

The original plans for the attraction called for portions of the ride to actually be outside and for the attraction to be longer than it ended up being. This attraction wasn’t going to be part of the opening day attractions for Epcot and was planned for phase 2. There were delays in development for some of the other attractions planned (including attractions in Japan and Germany that we still have never seen come to fruition) that forced Disney to push up the construction date. They realized that there wouldn’t be enough attractions to meet the opening day demand, so they had to rush to get the Mexico attraction completed. The ride had to be shortened by about 40% of the original planned ride length and was redesigned to be entirely all indoors. It would have been very interesting to see how the attraction would have ended up if the creation hadn’t been changed and rushed.

While on the ride, you may notice that you are passing by guests dining at tables under the manufactured evening sky. It is a really unique experience for Walt Disney World. This restaurant is San Angel Inn, a very popular restaurant located right next to the ride entrance. This is very similar to the Blue Bayou restaurant and its proximity to the Pirates of the Caribbean at Disneyland. This was extremely popular at Disneyland, so this was a way to incorporate this experience at Walt Disney World. For the complete experience, make sure you have a dining reservation to enjoy a meal at San Angel Inn and go on the boat ride before or after your meal. This helps give you all perspectives. Plus, the food there is delicious and worth the stop, so it’s a great excuse to have delicious Mexican food and a margarita.

3 – Panchito is the only caballero who is actually from Mexico.

So Panchito, Jose, and Donald are the crazy characters who are the “stars” of the attraction. Interestingly enough, Panchito is the only one of them who is actually from Mexico. Donald is American while Jose is Brazilian. Panchito is the leader of the bunch, so I guess what he says goes, so that is why they are in his home country to perform in Mexico City.

2 – There are “new” animatronics in the finale scene.

Editor’s Note: Currently the three animatronics in the final scene of the Gran Fiesta Tour have been removed and are undergoing refurbishment.

1 – You may recognize the child-like animatronics.