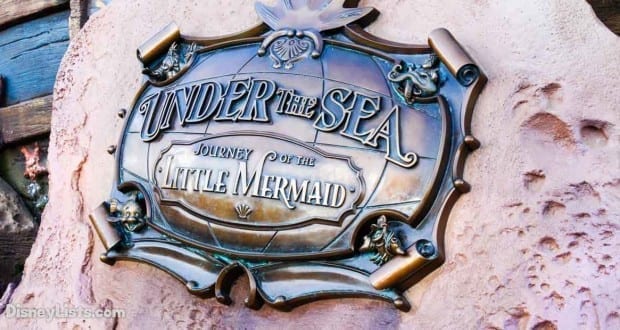 8 – Try to count the characters on the attraction.

If you counted each and every character on the entirety of the ride, you would find that there are 183 total characters. You will have to keep your eyes peeled during the “Under the Sea” section of the attraction, as that is where you will find the majority of the different characters that you count.

7 – Ursula is a large animatronic.

The Ursula animatronic is a major part of the attraction, as that is a pivotal and iconic part of the movie. The “Poor Unfortunate Souls” song is definitely one of my favorites and one of the most popular villain songs. Guests would expect Ursula to be close to scale and have an overwhelming presence on the attraction. Her animatronic is 7.5 feet tall and 12 feet wide. She is also perched a little higher than the main floor, so the animatronic delivers on meeting the expectations that we have for Ursula. She was also equipped with a “squash-and-stretch” function in the torso of the figure so that she can move effortlessly as her character does to the music. 6 – Skin technology had to be created.

The Ariel, Ursula, and King Triton animatronics, by default, have a lot of skin exposed. Because of this, Imagineers had to create and utilize skin technology to make their movements and appearance look more realistic. Most other animatronics that have been created have either had fur or clothes on them, so the skin for the high movement areas wasn’t as much of an issue. I don’t know about you, but now I am going to pay even closer attention to their skin the next time I am on the attraction!

5 – The ride was built in models first.

Before the Imagineers kicked off construction on the actual attraction, models were built first. The first was a one-quarter inch model so that the Imagineers could visualize each scene of the attraction before it was built. After they used this model, a one-inch scale model was created, and more details considered for the actual attraction. After this, the construction was able to begin.

4 – One of the coolest hidden Mickey’s ever!

If you are a hidden Mickey stalker, then you are going to love this one. The Imagineers outdid themselves this time and created a hidden Mickey that you can only see at noon on Mickey Mouse’s birthday. At this moment, the sun is in just the right position for the light to create a hidden Mickey on the path in the ride queue for the attraction. Mickey’s birthday is November 18th, and you have to look for it right at noon. The location is hard to describe, but start looking for some of the boat wreckage, especially the area with a figure with its hand its chest. Once you pass that, you should be able to look up and see the rock formations that appear to form part of a Mickey head at the top. Then on November 18th at noon, you should see the hidden Mickey on the path! This is one of my absolute favorite fun facts in Walt Disney World!

3 – The ride was designed for various Disney parks in the mid-1990s.

It is surprising that it took until 2011 for us to have a dark ride for the Little Mermaid. This has been a long-rumored and planned attraction for theme parks all over the world. It was first a concept for Disney World and Disneyland Paris. Then it was rumored that Tokyo DisneySea and Hong Kong Disneyland would each have the attraction upon their opening, which didn’t end up happening. These rumored versions were never built, but a simulated version was created and included as bonus features on the Platinum Edition release of The Little Mermaid on DVD. It may have taken many years, but we finally have the ride that we had heard so much about. 20,000 Leagues Under the Sea used to be where the Under the Sea ~ Journey of the Little Mermaid attraction resides today. The Imagineers are notorious for paying homage to past attractions so that we can remember them as we enjoy the new experiences that have taken their place. They did some really cool things this time. The first nod is an imprint of the Nautilus submarine in one of the rock formations. You have to look for this one in the ride queue as you wind through to board the attraction. The next thing they did was one of the coolest and carefully planned ways to pay homage. When 20,000 Leagues Under the Sea was shut down. The team bottled water from the attraction before it was drained, labeled it, and kept it safely stored for 18 years. At the opening ceremony for the attraction, the water was then poured into the water at the attraction. Amazingly, cool!