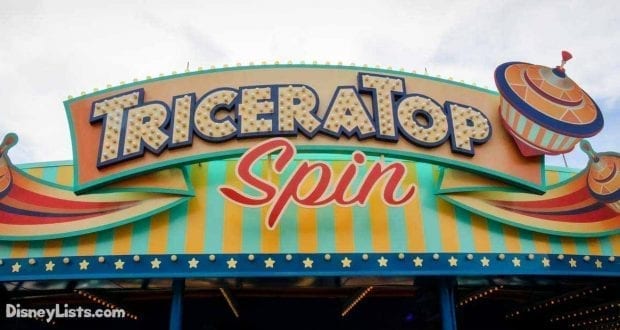 There is just something about dinosaurs that are so alluring by guests of all ages.  We all have a huge interest in learning more about dinosaurs, and when they are incorporated into the experience in a fun way we love that, too!  TriceraTop Spin is in the carnival-like area of Dinoland, U.S.A. at Disney’s Animal Kingdom.  It is a simple, yet fun attraction that guests of all ages get to enjoy, which is awesome since there aren’t a ton of rides for smaller children at Animal Kingdom.  Here are 7 great facts and secrets about TriceraTop Spin:

The area was in need of more attractions that could keep guests entertained and disperse more of the lines and wait times.  Imagineers decided to create the Dino-Rama carnival-like area that would include carnival games along with two different rides.  TriceraTop spin was one of these attractions.  The entire area opened in November of 2001 to expand Dino-land U.S.A.  There have been no major expansions to the area since Chester and Hester’s Dino-Rama area opened.

6 – The backstory for the area. 4 – Be careful riding in the heat of the day.

The attraction offers no protection from the sun, so it is exposed to all of the elements.  The ride queue is completely outside, but at least is covered and there are fans that blow in the queue.  This isn’t the attraction to get in line for when you need a place to cool off.  The attraction is also located on a big area of asphalt that doesn’t help with the heat and feeling hot.  If the kiddos are tired and hot, then you may want to find a different attraction to visit and save this one for early morning or later in the evening.

3 – The vehicle has two controls.

When the ride is in motion, it looks like a spinning top.  This is a popular style of ride at many theme parks around the world.  This style is also known as “hub-and-spoke” style as well.  As the ride spins and continues to rotate, the top of the spoke in the center of the attraction rises and reveals a dinosaur as the heart of the attraction.