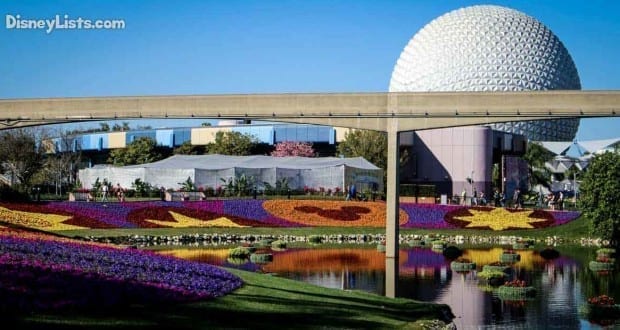 One of the Magic Kingdom’s fun secrets is that the park is actually on the second level of the park.  Well many guests don’t realize that this is also the case for the Future World area at Epcot.  The Future World area is also sitting on top of tunnels.  The tunnels allow for supplies and trash to be transported from within the stores and restaurants without being carted through the guest and attraction areas and detracting from the theme and the magic in that area of the park.

I guess it could also be considered a short walk, depending on how you look at it.  If you walk from Canada to Mexico in the World Showcase area of Epcot, it is a 1.25 mile walk without even entering any shops or attractions in each of the countries.  You pass through 11 countries on your walk, so some could say that 1.25 miles for 11 countries is a pretty quick stroll! 6 – Look closely at the buildings in the World Showcase.

5 – World Showcase is home to a gift from Japan.

When the Magic Kingdom first opened in 1971, Japan sent over a statue as a gift to commemorate the opening.  Once the World Showcase was opened at Epcot, the statue was moved to its rightful place at the Epcot pavilion.  You can see the statue as you enter the pavilion.  It is a 45 year old statue and an amazing gift of the friendship and respect between our two great countries.  It is its own little piece of history.

4 – The red sidewalks were intentional.

3 – Gina Torres will talk to you at Mission: Space.

At the Mission: Space attraction if you try pushing all of the buttons at once during the experience.  If you do that, you will hear Gina Torres over the loud speaker telling you to quit doing that.  It adds to the realism of the entire experience. Actress Gina Torres has appeared in many television series, including Hercules: The Legendary Journeys (as Nebula), Xena: Warrior Princess (as Cleopatra), the short-lived Cleopatra 2525, Alias (as Anna Espinosa), Firefly (as Zoe Washburne), Angel (as Jasmine), 24 (as Julia Miliken), Suits (as Jessica Pearson), The Shield (as Sadie Kavanaugh), and Westworld (as Lauren). 2 – Germany was supposed to have a boat ride.

Over at the Germany pavilion, you will notice a wall at the back with a mural.  If you knock on the mural, it sounds hollow.  That is because the mural was put in place to cover the area where a boat ride was planned to be.  The mural depicts the Rhine River Cruise, which is what the boat ride was meant to be.  We sure wish that they would move forward with adding this boat ride after all of these years.  We’d love another ride attraction out in the World Showcase!

1 – Look for the Tower of Terror behind Morocco.

If you look over toward the Morocco pavilion, you will notice that you can see the Tower of Terror in the background.  You will also notice that it seems to fit in nicely with the pavilion and match the colors and design for the Morocco pavilion.  When the Tower of Terror was being built, the imagineers took this into consideration to ensure that the attraction didn’t look like an eyesore for the guests in the World Showcase.  It’s just another way that every detail is considered to preserve the magic and the experience.