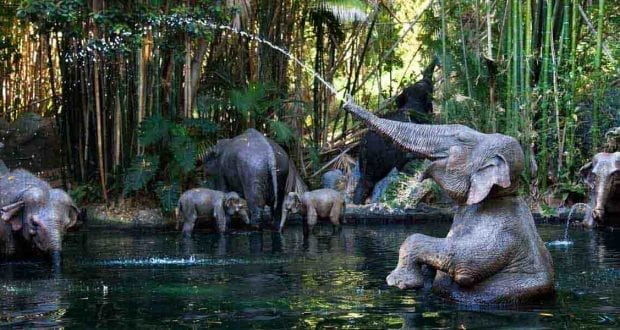 On the Jungle Cruise at Disneyland park guests board a trusty tramp steamer for a 7-minute guided tour of jungles from around the world, brimming with exotic animals and lush tropical foliage.

Adventureland at Disneyland Park – What You Need to Know

At Adventureland in Disneyland Park you’ll discover fun and adventure around every corner. Walt Disney once said, “Here is adventure. Here is romance. Here is mystery. Tropical rivers – silently flowing into the unknown. The unbelievable splendor of exotic flowers … the eerie sound of the jungle … with eyes that are always watching. This is Adventureland.” Here is what you need to know about Adventureland at Disneyland Park!

Many adventurers have dreamed of visiting faraway, mysterious or dangerous lands. They get a taste of that excitement in Adventureland, with the intrigue of a remote, tropical jungle set during the early to mid-20th century. Adventureland harkens back to a time when explorers ventured into unknown realms full of natural wonders. Voyagers explore the African rainforest (Tarzan’s Treehouse); India’s Lost Delta (Indiana Jones Adventure); Polynesian islands (Walt Disney’s Enchanted Tiki Room); and uncharted lands in Asia, Africa and South America (Jungle Cruise).

An exotic marketplace, The Tropical Hideaway, serves as an outpost for guests to discover the delicious tastes of bao buns and a refreshing Dole Whip. Set along the Jungle River waterfront, it’s the perfect spot to sit and relax in between adventures. Colorful wildlife can also be found at the Hideaway. After years of performing with the bird mobile chorus of Walt Disney’s Enchanted Tiki Room, Rosita is spreading her wings and taking flight toward a solo career. Guests will find her on the river’s edge at the loading dock waiting for her boat to arrive. This friendly bird makes small talk with world travelers passing through The Tropical Hideaway. 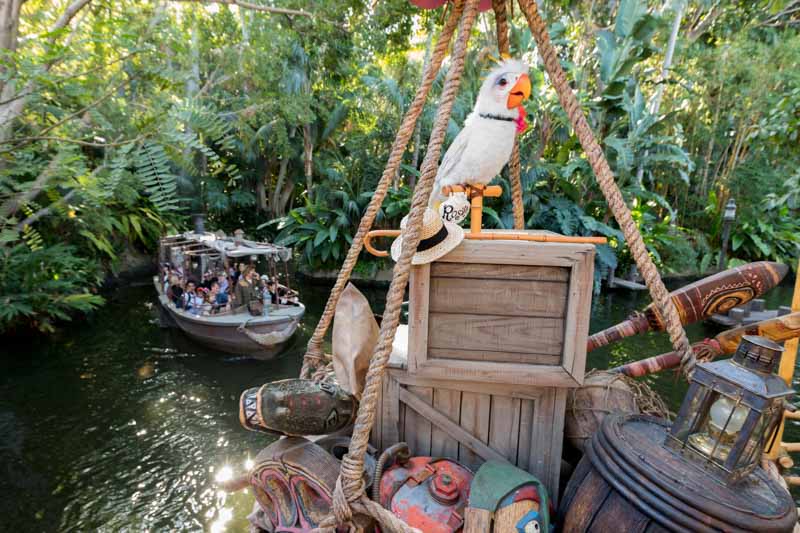 After years of performing with the bird mobile chorus of Walt Disney’s Enchanted Tiki Room, Rosita spread her wings and took flight toward a solo career. Guests now find her along the Jungle River waterfront at The Tropical Hideaway – the destination for extraordinary worldly eats at Adventureland at Disneyland Park. (Christian Thompson/Disneyland Resort)

Adventureland has four attractions, including one with Disney FastPass: the thrilling, high- speed Indiana Jones Adventure. For shopping, guests may find everything from snacks to sunscreen and sandals at Adventureland Bazaar.

Keep an eye out for sea voyager Moana as she greets guests and appears for photos near Tarzan’s Treehouse.

Bengal Barbecue is a popular spot for a quick, healthy meal, with chicken, beef and vegetarian skewers. The Tiki Juice Bar offers refreshing snacks and Dole Whips outside Walt Disney’s Enchanted Tiki Room. Guests may choose to plan ahead and use mobile ordering on the Disneyland app to order their favorite food and beverages from these two Adventureland dining locations.

From the hanging vines and orchid trees to the giant timber bamboo, the landscaping creates a rich, tropical atmosphere that serves as both a backdrop and a character in Adventureland. The foliage is designed to look as if it had been created by nature. The Jungle Cruise vegetation has evolved into its own tropical jungle with three levels: the upper canopy, the understory and the forest floor. The “father” of the attraction’s jungle was horticulturist and Disney Legend Bill Evans, who directed the landscaping of much of Disneyland in the 1950s. 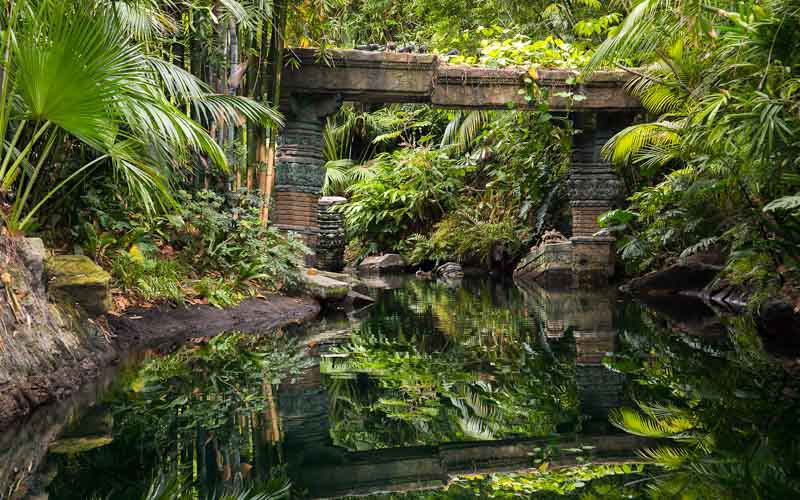 Planting the Magic at the Disneyland Resort. The landscape helps tell the story of the resort. (Paul Hiffmeyer/Disneyland)