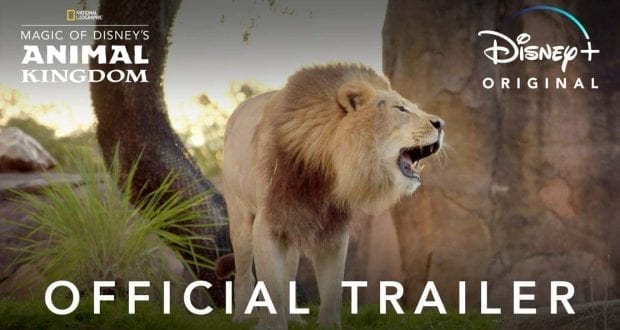 Disney+ has shared the trailer for its upcoming original series “Magic of Disney’s Animal Kingdom” premiering globally on Friday, September 25. We can’t wait to get a backstage look at Cindy’s favorite park! Catch the trailer below!

Have you ever wondered what it’s really like to feed lions or how about introducing a new baby hippo to its “bloat”? You’ll get a chance on September 25 on Disney+ with the series premiere of “Magic of Disney’s Animal Kingdom,” which showcases everything you’d like to know about our animals and animal care team. Here’s a look at the show’s brand-new trailer.

Expect to see an unprecedented look at some of the most intriguing animals on the planet and how we care for them at Disney. I know you’ll be impressed by the animals you see in the series, but I think what you’ll really walk away with is a love and appreciation for our animal care experts who have formed remarkable bonds with the 5,000-plus animals who call Walt Disney World Resort, “home.” I’m extremely proud of our animal care team and love how their passion and skill shine through this series.

So, set aside time on Friday, September 25 to enjoy the premiere of the “Magic of Disney’s Animal Kingdom” on Disney+, with new episodes dropping each Friday for the eight-episode run of the series. It’s going to be a wild ride.

Follow my Instagram page (@DrMarkAtDisney) as well as @DisneyPlus #MoDAK and the Disney’s Animals, Science and Environment Facebook page (@DisneyASE) for more information about the show and an inside look at the work my team is doing to care for these animals each and every day. Editor’s Note: During the phased reopening of Walt Disney World in 2020, these shows are temporarily suspended.