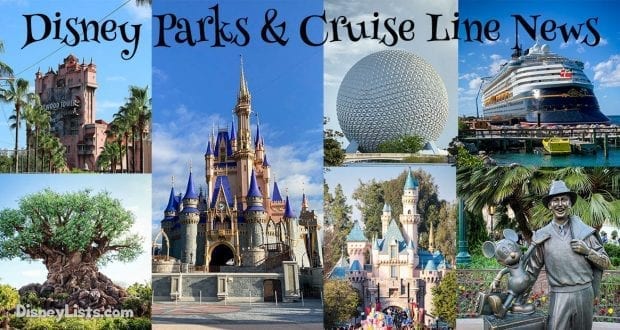 Very big news out of Disney this week. A replacement for Disney’s Magical Express has been announced giving guests an option for getting back and forth from the airport an option with many of the same services offered by Magical Express. Disney also unveiled the replacement for Mouse Gear and announced the return of Club Cool over at Epcot. Disney has begun to relax its face mask policy, but cancellations continue over at Disney Cruise Line. We have a bunch of information on reopening at Disneyland and the return of character dining at Aulani. All this and a bunch more in this week’s news roundup.

We’ve known for some time that Disney’s Magical Express will be ending at the end of 2021. Many guests have wondered what the best way to get from Orlando International Airport to Walt Disney World. Mears, the current service provider for Disney’s Magical Express, has announced that they will continue to offer the service to guests with Mears Connect. Learn more at the link below.

Click here to learn about Mears Connect, the replacement of Disney’s Magical Express.

This week Disney announced a new flagship merchandise location coming to EPCOT. The store will replace Mouse Gear. Learn more at the link below.

This week, Walt Disney World relaxed the face-covering policy for the first time since the parks have reopened last July. Now, guests can remove their masks for photos as long as they are stationary and socially distanced. Disney PhotoPass photographers will let guests know they can remove masks for photos. Read the full policy below.

Face coverings are required for all Guests (ages 2 and up) and Cast Members, including those who have received a COVID-19 vaccine. Please bring your own face coverings and wear them at all times, except when dining or swimming. You may temporarily remove your face covering while actively eating, drinking or taking an outdoor photo, but you must be stationary and maintain appropriate physical distancing during this time.

All face coverings (whether disposable or reusable) must:

At this time, based on guidance from health authorities, neck gaiters, open-chin triangle bandanas and face coverings containing valves, mesh material or holes of any kind are not acceptable face coverings.

Costume masks are also not considered appropriate and are prohibited from being worn, in alignment with our existing rules.

The use of face coverings is not a substitute for physical distancing.

Heroes assemble! Avengers Campus, the highly anticipated new land coming to Disney California Adventure, has an opening date! The land will open on June 4, 2021. Learn more at the links below!

Disney has confirmed that Fan-favorite Club Cool Hosted by Coca-Cola will be returning to EPCOT. Learn more at the link below.

Click here to learn more about the return of Club Cool Hosted by Coca-Cola.

This week Disney Cruise Line reached a significant construction milestone marked by the traditional keel laying ceremony of the Disney Wish, the first of three new ships in the line’s fleet expansion. Also announced today, the magic of Captain Minnie Mouse will come to life for the first time through whimsical artwork on the bow of the Disney Wish, a hallmark of Disney Cruise Line vessels. Learn more at the link below.

Disney’s Grand California Hotel and Spa and Disneyland Parks are gearing up for their respective reopenings at the end of April. This week, Disney released information for guests to know what to expect when visiting because of the modified operations in the phased reopening. Learn more at the links below.

Click here for what you need to know about Disneyland Resort’s phased reopening.

Disney Cruise Line has again extended their suspension of sailing. All Disney Dream, Disney Fantasy, and Disney Wonder departures through June 2021, and Disney Magic European sailings through September 18 are suspended.

Aulani’s Resort’s Character Breakfast is returning in May. Disney Cast Member Nikki Moreno has the details below:

Aloha Kakahiaka means good morning to you! This is not just a Hawaiian language lesson, but also a line sung by Aunty during the character breakfast at Makahiki Restaurant, which I’m happy to announce will return on May 7 to Aulani, A Disney Resort & Spa.

Just like we have done with other resort experiences, we have made some adjustments to the experience with the health and safety of our cast and guests in mind. Please see the resort’s website for additional safety measures. 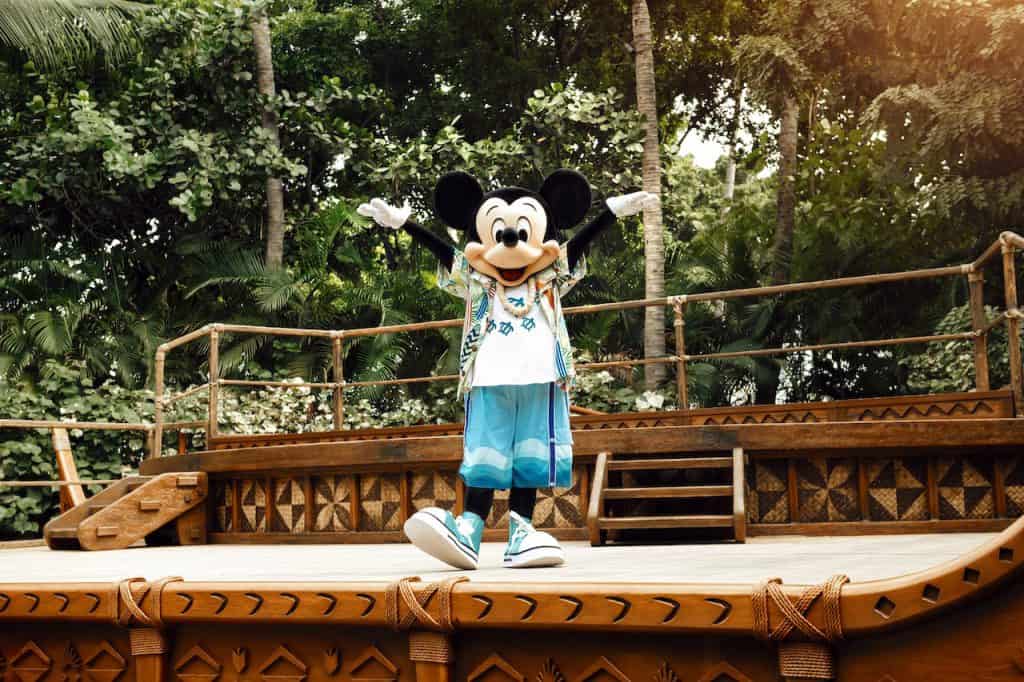 At the character breakfast, Mickey Mouse and his friends will join Aunty or Uncle for fun songs and entertainment while guests enjoy a delightful three-course breakfast. Upon arrival at Makahiki, and throughout the breakfast experience, guests will have an opportunity to take photos with Disney friends to mark the occasion!

A bountiful breakfast will be available seven days a week at Makahiki Restaurant, with characters appearing on Mondays, Fridays and Saturdays. During the month of May, character dining will be exclusive to resort guests.

And let’s not forget about all the delicious food you’ll enjoy during the breakfast! There, you will choose from entrees including fluffy macadamia nut pancakes with a Tahitian vanilla sauce or Hawaiian-style Loco Moco with hamburger steak, all accompanied by pastries and seasonal fresh fruit. Keiki – or kids – may choose the Mickey and Minnie waffle, which includes a Belgian mickey waffle and red velvet Minnie waffle. Is your mouth watering yet? 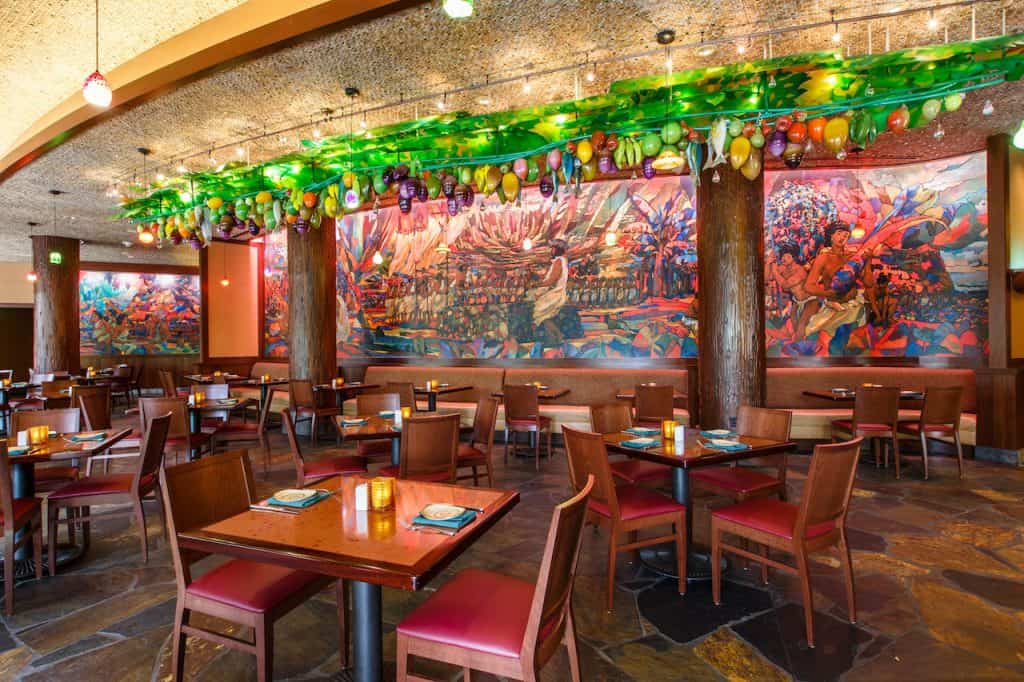 A morning at Makahiki is the perfect way for guests to start the day at Aulani Resort before exploring vacation paradise. Aulani Resort combines the wonder of Disney with the beauty of Hawai‘i in one legendary vacation destination, offering something for everyone. Whether you want to sit back, relax and admire the view from a quiet romantic infinity-edge pool, float along a lazy river or splash down water slides, there are plenty of opportunities for family fun.

Reservations for Aulani, A Disney Resort and Spa are now available through 2022. To plan your stay please visit DisneyAulani.com.

In the photo below, artisans transform 40 tons of sand into a detailed sculpture at Disney’s Animal Kingdom Theme Park, celebrating National Geographic’s “Secrets of the Whales,” an original series streaming on Disney+ on Earth Day (April 22). The intricate masterpiece is located on the theme park’s Discovery Island Stage until April 30. (Todd Anderson, photographer) 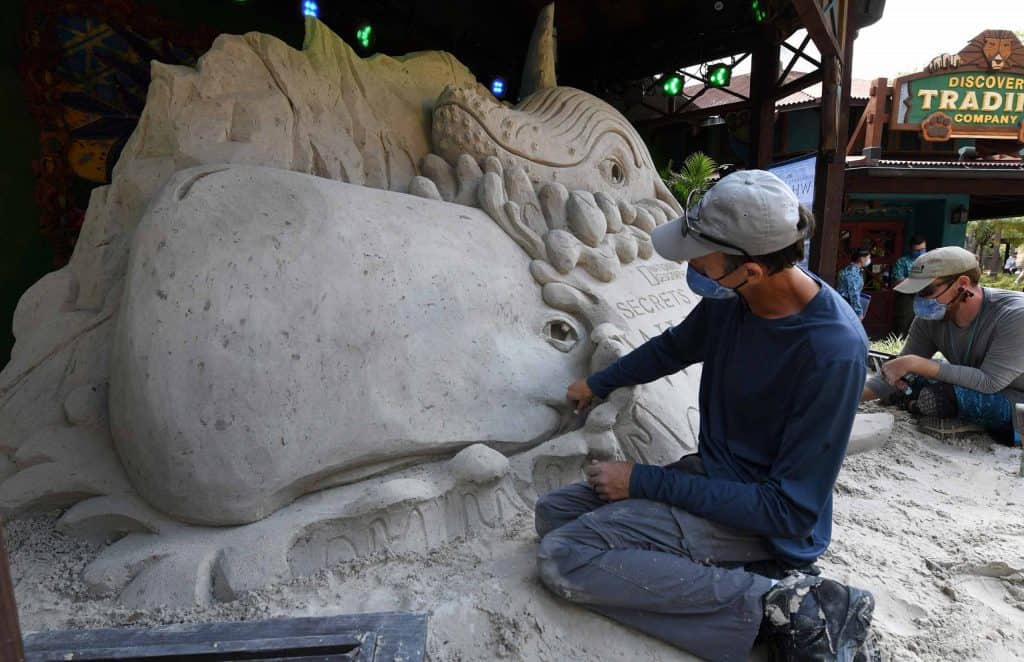 A man has run from Disneyland to Walt Disney World! Learn more about his amazing story below.

The Scripps Spelling Bee is returning this year and will be at Walt Disney World. Here are the details from the Scripps website:

The Scripps National Spelling Bee returns this year with top spellers from across the U.S. and the globe gathering near Orlando, Florida, on July 8 to compete in the nationally televised event.

The final rounds of this year’s Bee will be hosted in person at ESPN Wide World of Sports Complex at Walt Disney World Resort. The finals, featuring 10-12 accomplished spellers, will be broadcast live in primetime on ESPN2.

The 10 to 12 finalists who will travel to the Orlando area will have earned the right to compete in the finals by advancing through three levels of competition: the preliminary, quarterfinal and semifinal segments. In past years, those three rounds were held over one week – Bee Week. This year, due to the global pandemic, the preliminaries, quarterfinals and semifinals will be held virtually in the weeks leading up to the July 8 finals and will be broadcast live on ESPN platforms. The semifinals are slated for June 27, and dates for the earlier virtual rounds of the competition will be announced this spring.

It was a much-anticipated visit by Brady, who starred along with teammate Rob Gronkowski in Disney’s iconic “I’m Going to Disney World!” commercial after the Super Bowl in February. Brady was named the game’s MVP after leading the Bucs to victory over the Kansas City Chiefs. Immediately after the game, Brady pronounced he was going to Walt Disney World.

He made it Easter weekend, spending a sun-splashed day on Monday at Disney’s Hollywood Studios to experience Star Wars: Galaxy’s Edge for the first time. Brady built his own lightsaber at Savi’s Workshop, drank Blue and Green Milk, interacted with beloved Star Wars characters and experienced the popular attractions Millennium Falcon: Smugglers Run and Star Wars: Rise of the Resistance.

Brady and Gronkowski (who visited Walt Disney World in February following the Super Bowl) were the latest NFL megastars to celebrate their team’s Super Bowl victory at Disney theme parks. The tradition, which has become an enduring part of the Super Bowl’s history, began in 1987 when New York Giants quarterback Phil Simms first appeared in the Disney commercial and visited Walt Disney World Resort following his team’s Super Bowl victory.

Click here for what you need to know about the 2021 Taste of EPCOT International Flower & Garden Festival!

Click here to see photos and video of the Menu Boards with pricing for easy trip planning!

Click here to see photos and video of the different topiaries around EPCOT!

Click here for photos and video of our visit to the Flower and Garden Festival!

Click here to see photos of some of the food we have enjoyed at the 2021 Flower and Garden Festival.

The Soul of Jazz: An American Adventure at EPCOT – Now Open

Click here to learn more about The Soul of Jazz: An American Adventure at EPCOT

Click here for details on “The Most Magical Celebration,” which begins on October 1, 2021, on the 50th anniversary of Walt Disney World and runs for 18 months.

Jungle Cruise – Updated in Phases, while remaining open to guests in 2021

Click here to learn about the updates coming to The Jungle Cruise at Walt Disney World and Disneyland Park.

EPCOT Reimagined – Now Through 2022 and Beyond

Click here for what we know about the New EPCOT and what’s coming!

A Touch of Disney – Now at Disney California Adventure

Foodie Guide to A Touch of Disney at Disney California Adventure

Click here for what you need to know about Disneyland Resort’s phased reopening.