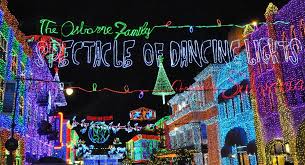 We speculated last month when the 2015 schedule for Osborne Festival of Lights was release that this may be the last year given the coming changes to Hollywood Studios. That speculation ended today when Disney confirmed that the festival will be ending after this coming holiday season.

Started in the Arkansas yard of Jennings Osborn, the unbelievable collection of lights grew and grew and grew. In 1995, the display moved to Disney World and became a holiday tradition in the Streets of America section of Hollywood Studios. The display is so full of elaborate set designs and hidden details, it’s impossible not to discover something new with every visit.

Every ten minutes the excitement is amped up further as the light dance to many holiday music favorites. The makers of magic even find a way to ensure a pleasant “snow fall” each and every night. This is one of the amazing things that make the holidays a great time to visit the world.

This is truly a spectacle that shouldn’t be missed. The very popular attraction will return from November 6, 2015 through January 3, 2016. Make plans now to attend this final year.

Watch a performance of the dancing lights here.