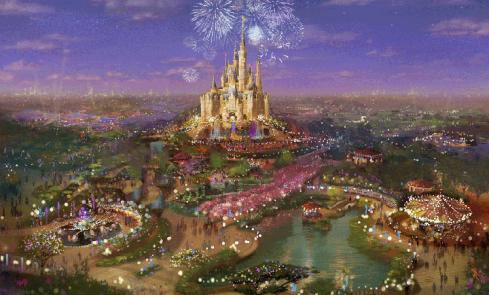 Disney has finally announced the opening date of it’s much anticipated Disneyland Shanghai. Opening ceremonies will be held June 16, 2016 when the park officially opens to its first guests. Disneyland Shanghai becomes the sixth Disney theme park in the world, and the second in China.

The Disneyland park with six themed lands is just the tip of the iceberg in this massive undertaking. It also includes two hotels (one of them Toy Story themed), a Disney Springs style dining, retail and entertainment district, and a large recreation area. If you think this is just a clone of Disneyland California or the Magic Kingdom at Walt Disney World, think again. The park will include unique attractions design specifically for Disneyland Shanghai. Sure to be the envy of US park goers is Treasure Cove, the pirate-themed land in a Disney park. Top that off with the largest Disney castle ever. “When it opens in June, Shanghai Disney resort will be a one-of-a-kind, world-class destination that is authentically Disney and distinctly Chinese,” said Robert A. Iger, chairman and chief executive officer, The Walt Disney Company. “The resort reflects Disney’s legendary storytelling along with China’s rich culture, and showcases some of the most creative and innovative experiences we’ve ever created. We’re looking forward to showing it to the world and sharing it with the people of China for generations to come.”