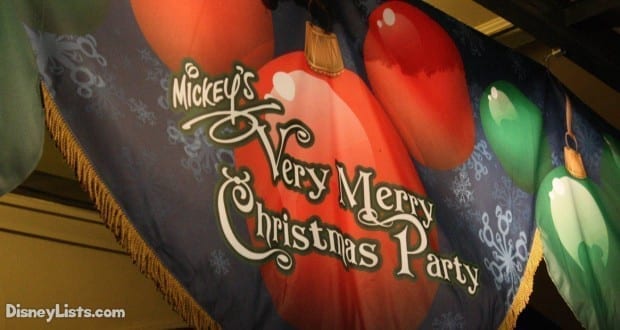 Following on the heals of the Mickey’s Not So Scary Halloween announcement, Disney World has also released the dates for the 2016 Mickey’s Very Merry Christmas Party. The party will be held 21 nights this holiday season starting November 7 and running through December 22. Mickey’s Very Merry Christmas Party is a special after-hours party held in the Magic Kingdom. Wildly popular, the event features special entertainment, an incredible Christmas parade, a special fireworks show, all the characters in decked out in their Christmas best, and of course the big man himself, Santa Clause! It even snows on Main Street. The Christmas party is a great way to get into the holiday spirit and we highly recommend attending it if you’ll be at Disney World in November or December. More details are below.

Start planning for a marvelous gathering with family, friends and some familiar Disney faces!

When Mickey celebrates the season, Magic Kingdom park lights up with excitement for Guests of all ages. Cinderella Castle shimmers. Joyful music fills the air. Disney Characters don their most festive attire. Favorite attractions take on a holiday theme. And enchanting surprises lie around almost every turn!

Held on select evenings, Mickey’s Very Merry Christmas Party is currently scheduled to take place on the following dates in 2016:

Please note: separate admission is required for this special event.

While the date tickets go on sale and the prices have not been released, in 2015 tickets ranged from  $74-82 + tax for adults and $69-77 + tax for children under 10. Given the recent price increases at Disney and the fact that many nights sell out, expect prices to jump significantly. If the recently announced Disney After Hours event is a guide, expect ticket prices from $100 to $149..

Tickets should go on sale in late spring. Be sure to sign up for our newsletter and we’ll let you know as soon as tickets go on sale and final pricing information.

Mickey’s Very Merry Christmas Party is a separate ticketed event held on select nights at Magic Kingdom theme park in November and December from 7 pm to 12 am. Prices for this event range from $74 to $82 plus tax, per person. Prices depend on the date of the party and advance purchase prices are often cheaper. There are also discounts for Military and Annual Passholders on select nights. The party includes access to the attractions, free hot cocoa and cookies, character meet and greets, as well as many special entertainment options you will not want to miss! Some of these options can only be seen during the Christmas parties while others are featured during the week of Christmas. However many guest will not have the opportunity to spend Christmas at Walt Disney World. Mickey’s Very Merry Christmas Party provides two months of opportunities to see these great Christmas entertainment offerings.  Read on to find out about the 5 can’t miss entertainment offerings you won’t want to miss at Mickey’s Very Merry Christmas Party.

Princess Anna and Queen Elsa present this holiday show on the Castle forecourt Stage. This show will feature our favorite snowman friend, Olaf and our mountain man, Kristoff. Elsa uses her special powers to transform Cinderella’s Castle into a beautiful ice palace as a gift to all people of this Kingdom. Last year this show attracted large crowds, so be sure to check the event guide and try to get a spot early. The closer you are to the stage the easier it will be to see Anna and Elsa.  Over 200,000 LED lights adorn Cinderella’s Castle in this breathtaking display. The lights will remain on all evening so you will have a chance to see them even if you do not see the show.  The lights make for stunning photographs of Cinderella’s Castle so be sure to bring your camera. This show takes place at Rockettower Plaza Stage in Tomorrowland and can only be seen during Mickey’s Very Merry Christmas Parties. Mike Wazowski from Monsters Inc. hosts this show as he and his friends Buzz Lightyear and Stitch travel across the galaxy on a mission to find Santa. This musical revue has lots of great dance numbers and a finale that is “out of this world!” This show is offered several times each night of the party so be sure to check the event guide for specific show times.

Join Mickey, Minnie, Donald and Goofy at this holiday show presented on the Castle Forecourt Stage several times throughout the party. Check your event guide for specific show times. Mickey presents a special present to Minnie as Donald, Goofy and others share their own version of The Nutcracker in this musical show featuring dancing reindeer and toy soldiers.

2 – Mickey’s Once Upon A Christmastime Parade

This Festive Parade is one of the highlights of Mickey’s Very Merry Christmas Party. This parade features festive holiday music and some of your favorite characters decked out in their holiday best. You can expect to see Mickey and the gang, Jiminy Cricket, Winnie the Pooh, Tigger, Scrooge Mcduck and many more as they dance down the street with Elves, and Gingerbread men. The parade concludes with Santa Claus aboard his sleigh wishing Christmas cheer to all! This parade is typically presented twice during Mickey’s Very Merry Christmas Party. It begins in Frontierland and ends on Main Street U.S.A.  It is recommended to catch the second parade showing as it is typically less crowded then the first. 1 – Holiday Wishes: Celebrate the Spirt of the Season Nighttime Spectacular

Holiday Wishes is a special nighttime spectacular where the sky above Cinderella’s Castle is lit up with holiday cheer. This special holiday version of Wishes is hosted by Jiminy Cricket, this show reminds us all that during the holidays our home is where our heart is. The finale even features artificial snow! You will not want to miss this beautiful music and fireworks display!

You won’t want to miss these great entertainment offerings during Mickey’s Very Merry Christmas Party! With all the great holiday entertainment featured during Mickey’s Very Merry Christmas Party you may not find time to ride the attractions or take part in the other great offerings during the party. If you’ve seen any of these shows, which is your favorite?