On Sunday, May 27 we enjoyed a fantastic evening at Star Wars: Galactic Nights. In case you aren’t familiar, Star Wars: Galactic Nights is a thrilling Star Wars-themed event held after hours from 7 p.m.-midnight. It celebrates the entire Star Wars saga with out-of-this-world entertainment, special photo opportunities, event-exclusive merchandise, food & beverages, along with encounters with rarely seen characters that guests can only experience during this event. We were there for this amazing event. Catch all the details and our thoughts on the party below.

Star Wars: Galactic Nights is comparable to Mickey’s Not So Scary Halloween Party and Mickey’s Very Merry Christmas party in that it is a separate themed hard ticketed event. This event was $129 for adults and $124 per child. Disney Annual Passholders received a $10 discount. Unlike the Halloween and Christmas parties, Galactic Nights only occurs one night rather than multiple days. The timing of this party was coincided with the release of Solo: A Star Wars Story and MegaCon, a science fiction and comic convention which draws about 100,000 fans. Even though the party was only one night, it did not sell out.

Although Star Wars: Galactic Nights officially began at 7 p.m., ticketed guests are welcome to enter the park as early as 4 p.m. Like the Halloween and Christmas Parties, this allowed guests to get a head start on the fun and experience some of the park’s standard attractions including Star Tours – The Adventures Continue and The Twilight Zone Tower of Terror. Even though the party didn’t start until 7:00 pm, many of the party events, particularly photo opportunities, were available as early as 5:00 pm. We were able to get into many photo spots early, which gave us more time to experience everything the party had to offer (and it was A LOT!).

3 – Dress Up for the Occasion

Guests are encouraged to come dressed in their Star Wars best for Star Wars: Galactic Nights. We saw a variety of amazing outfits and costumes. Many guests who were happy to just wear Star Wars apparel.  In the future, if you find yourself going to this party and want to wear a costume, you’ll want to follow Disney’s Costume Guidelines for special events.

The main stage was the hub of the special event. Throughout the evening there was a DJ dance party and many other interactive features. Star Wars actor Warwick Davis was the Galactic Host for the evening. Also at the main stage were showings of Star Wars: A Galaxy Far, Far Away, which featured new video moments from Solo: A Star Wars Story. A special Imperial March (different from the First Order March you’ll find during the day) occurred multiple times through the night as well. The Imperial March included the Dark Lord of the Sith himself, Darth Vader. Finally, a new action sequence came to life as part of Star Wars: A Galactic Spectacular pyrotechnic extravaganza. Bottom line, there was a lot of entertainment throughout the evening bringing the characters and stories of Star Wars to life.

See the slideshow below for photos from the Rebel Base area.

One of the coolest parts of the evening were the projections onto The Hollywood Tower Hotel. Visible on the Sunset Boulevard area of the park, the facade of the Hollywood Tower Hotel was transformed via stunning projection technology to showcase familiar locations from across the galaxy. Favorite film moments, special effects, lighting, and of course the stellar Star Wars cinematic score supported each galactic location moment all night long. Star Wars Galactic Destinations is currently an event exclusive. The projections were on a loop so we saw most of them throughout the night, without having to stand there for 10 minutes. They were amazing and really added to the atmosphere of the evening. 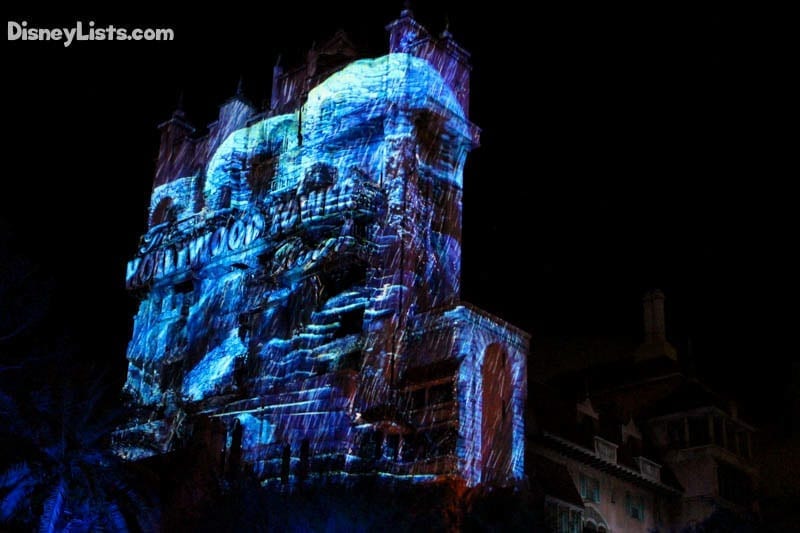 In addition to Warwick Davis, there were two other special guests that came to the event.

Over at The Epic Theater, we found out what it’s like to bring the epic stories of Star Wars to life, from the big screen to the real world! It all began with a special introduction by legendary Star Wars actor and Star Wars: Galactic Nights event host Warwick Davis. For all the news and details of the panel, be sure to click this link to read the full news article.

Throughout the park, we were able to step into immersive and iconic scenes from Star Wars films in a series of incredibly detailed photo locations. These special photo ops were only available at Disney’s Hollywood Studios during Star Wars: Galactic Nights.

To encourage guests to visit all of the photo locations, the Seize the Saga Scavenger hunt returned. Guests who collected all the clues were rewarded with exclusive artwork stickers that we placed on the back of our event credentials.

For the event, Disney offered special pricing on Memory Maker One Day for just $39 (the regular One Day price is $69). With Memory Maker One Day, you’ll receive unlimited digital downloads of your Disney PhotoPass Photos from Star Wars: Galactic Nights—capturing your encounters with Characters, icons, attractions and more. If you attend a future event, we highly recommend purchasing either Memory Maker One Day or the regular Memory Maker for your entire vacation. We took a lot of pictures and it was so nice knowing we would have all of them available in our MyDisneyExperience account.

There were many characters to meet during the evening, a number of whom can only seen on rare occasions. We got photos with three of the characters on the list. With everything there was to do during the evening, it was challenging to see all the characters. Some characters had very long lines. For instance, around 10:00 pm the wait time for Kylo Ren and Captain Phasma was 60 minutes. To see Rey with Chewbacca, the wait was 45 minutes. The other characters had moderate wait times of 15-20 minutes. Later in the evening, some of the wait times were much lower. For instance, at around 9:00 pm, we saw an estimated 25-minute wait for the First Order Storm Troopers, but around 11:30 pm there was no wait at all.

Here is the full list of Meet and Greet Star Wars characters for the May 27 event:

Check out the slideshow below of photo backdrops and character meet and greets:

For a special treat, Disney chefs created out-of-this-world Star Wars-themed offerings. Here is the menu of food items that were available only during the event:

The Wagyu beef slider was our absolute favorite dish of the evening. It was delicious. We also liked the cupcake, which was an orange truffle cupcake. The cupcake was fine-good but not amazing.

Alcoholic beverages were also available throughout the park. The drinks were on the pricey side ranging from $13.50-$14.50. Non-alcoholic versions were $8.29.

With all of the special entertainment, photo opportunities, and the Inside Star War’s Galaxy’s Edge panel, we only rode one attraction throughout the evening. We rode Rock ‘n’ Roller Coaster: Star Wars Edition because it was an experience we could only get that night. The overlay was pretty cool. They play Star Wars music and characters were projected on the wall. We’ve been to Disneyland and absolutely love Hyperspace Mountain. This overlay was not as in-depth or as good as that experience, but it was very cool nonetheless. The attraction photo was very cool (see below).

There were a few special merchandise items to purchase. The items included a special event t-shirt and water bottle. An exclusive Star Wars: Galactic Nights poster and Star Wars: Galaxy’s Edge trading cards were given to every guest as we left for the night.

We get a lot of questions on whether or not these events are worth the ticket price. There is no way around the fact that $129 per ticket is a pretty hefty price. A single day Hollywood Studios ticket for May 27, 2018, would cost $122 for an adult. Compared to a one day ticket, it’s not that bad. However, realistically almost no one buys a single day ticket. Is this event really worth it? The answer is yes and no. Unlike the Halloween or Christmas parties which will appeal to a wide variety of guests, this party is definitely targeted to a very niche audience. If you and your family are crazy huge Star Wars fans, then this party was made for you and you will love it. Between the exclusive entertainment, characters, attractions, and photo opportunities, you’ll be in Star Wars heaven! If you’re not really into Star Wars are only a casual fan, then this party is not for you!

If you attend a party in the future, you’ll want to decide ahead of time what your priorities are for the event. If your vacation plans allow for a “regular” day at Hollywood Studios, then we recommend saving as much of the non-exclusive attractions for that time. We had a very hard time getting done what we wanted to do and there were many things we missed out on, such as characters. Don’t take up precious party time by spending time at Muppet*Vision 3D!

Here are our recommendations for the best night possible:

Overall we really enjoyed the party. We’re huge Star Wars fans so it made sense for us. The entertainment was top notch and we think the characters and photo backdrops were excellent. If you’re a Star Wars fan, then this event was made for you!

The Disney Company provided us with two complimentary Star Wars: Galactic Night passes. However, the thoughts and opinions contained in this article are our own.

After years of multiple Walt Disney World vacations, Cindy and Chad's dream of living in Orlando came true in 2010. After friends and family made them their go-to-people for Walt Disney World advice, Cindy and Chad launched DisneyLists.com in August 2015 to share their knowledge and love of Disney. Chad and Cindy have been Disney World Annual Passholders for years, DVC members, together have raced more than 70 runDisney races, and particularly love cruising on the Disney Cruise Line. Chad and Cindy also regularly represent DisneyLists.com at Walt Disney World media events. While attending these events, they get an insiders view of all the new things that have come to Walt Disney World. These experiences have helped them gain knowledge and expertise they happily pass on to their followers. They still can't believe how lucky they are to have such an amazing opportunity and will continue to share Disney with anyone who will listen!
Disneylists.com Newsletter
Follow us on Facebook
Find us on Facebook
Follow Us on Instagram
Oh, the places you'll go! 🚢 #DisneyCruiseLine