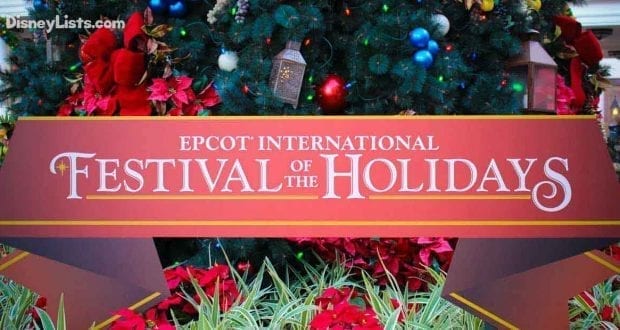 We love Disney World this time of year. In addition to tons of unique things to see, do and experience for the holidays, it also seems to always be a busy time of the year for Disney news. This week, we finally got a peek at the holiday kitchen menus over at Epcot’s International Festival of the Holidays. We also have significant changes coming soon to Hollywood Studios, changes to Minnie Van service, and a grand re-opening of one of our favorite stores. We have a bunch of special event news, a new arrival at Animal Kingdom Lodge you’ll love and lots more. Check out the entire round-up of news this week from around Disney World below.

1 – Disney Releases Menus for International Festival of the Holidays

It’s no secret that we love Disney, the holiday’s, and food. When those three things come together, it’s something special. So, we were thrilled when Disney World announced that the International Festival of the Holidays would be returning to Epcot in 2018. The festival, which runs from November 18 through December 30, 2018, is a celebration of holiday traditions from around the world and features a variety of holiday entertainment offerings including the amazing Candlelight Processional and holiday treats in 16 Holiday Kitchens around World Showcase.

As for us, the food is our favorite part, and Disney World has just released the 2018 Holiday Kitchen menus. As always, everything looks delicious. To view the complete menus, click here.

For more information on Epcot’s International Festival of the Holidays, click here.

For more information on the Candlelight Processional, click here.

Minnie Van, Disney’s version of Uber or Lyft in adorably decorated vehicles, continues to expand its service offerings around and beyond Walt Disney World Resort. Disney recently added service for guests to and from Orlando International Airport. Service has now begun for guests heading to Port Canaveral for a Disney Cruise adventure. Minnie Van can accommodate up to six guests and their luggage. The cost for the trip, which is roughly an hour away from Disney World is $240 per car. Guest can arrange for transfer through Disney Cruise Line embarkation services.

If you haven’t been to Disney World lately, you may not recognize the place with the unprecedented level of construction going on pretty much everywhere on property. A lot of the current development is centered around Hollywood Studios as the park is completely overhauled with the addition this year of Toy Story Land and next year with Star Wars: Galaxy’s Edge. Crowds are expected to be huge. To prepare for record levels of visitors, Disney has also been hard at work updating the infrastructure and transportation around Disney World. At Hollywood Studios, the parking lot has been expanded, and a brand-new entrance will be opening early November.

The old entrance off Buena Vista Way will be closed and restricted to buses only. All guests will now arrive via a new entrance and toll booths on the south-east side of the property off Osceola Parkway where a new multi-level interchange was recently constructed. Guests will now have direct access to Hollywood Studios from surrounding highways and other areas of the park without the need to navigate intersections with traffic lights. This change should make getting in and out of Hollywood Studios much easier and dramatically improve traffic on Buena Vista Parkway.

For more information and a map detailing the new entrance and surrounding area, click here.

4 – Grand Re-Opening of World of Disney

World of Disney at Disney Springs, the largest Disney store in the world, has been undergoing a major refurbishment this year that has finally come to completion. The brand new World of Disney is now open, and it’s fantastic. Guests will notice two significant differences. First, the décor has been freshened up to match the overall theme of Disney Springs. However, the changes are just on the surface. The layout of the store has also been opened up to improve guest movement throughout the store. We’ve always loved World of Disney, but the cramped design of the store made movement difficult to impossible on busy days.

Click here for our article on the new World of Disney. We love it!

See our Instagram Story with lots of photos and video!

A new Ultimate Christmas Package is available for guests visiting in December. This package is unlike the typical Disney World offers as it is for set dates and features a list of exclusive access events.

This package can be booked by calling the Walt Disney Company or by working with one of our free vacation planners. For a no-obligation quote on this package or a Disney World vacation at another time of the year, click here or call 407-442-0227.

Is the Disney Christmas Day Parade part of your Christmas tradition like it is ours? Want to be a part of it? Filming for the 2018 parade will take place in the Magic Kingdom November 7th through 11th.  Please keep in mind that dates are subject to change.

The population of Animal Kingdom Lodge went up by one this month with the arrival a baby okapi. Born to mom Zelda, the new calf weighed in at a respectable 54 pounds. The only known relative of the giraffe, okapis are an endangered species with only about 20,000 left around the world. Mom and baby will enjoy some private time before making their debut at Animal Kingdom Lodge in a few months. Check out the video below for some “awwwww, so cute” coverage of the new arrival.

Are you into Disney pin trading? Enjoy scavenger hunts? If so, head over to Animal Kingdom for a new PinQuest event happening now. Guests can purchase a PinQuest kit from the Outpost in Animal Kingdom. The kit includes a lanyard, NavigatEAR decoder medal, storage pouch, and the first clue card. Complete the task on the clue card and a cast member will stamp your map. Trade the stamped ticket for a special pin which when connected to the decoder medal will lead you to the next clue and task. By the end of the scavenger hunt, guests will have collected seven exclusive pins along with a lot of fun and great memories. If this sounds like fun, check it out soon. The event is offered for a limited time only.

Winter is on its way and the days are getting shorter. As such, operating hours for several Animal Kingdom attractions are being adjusted starting in November. Kilimanjaro Safaris will now close at 6:30 pm. Kali River Rapids will operate from 9:30 am to 7:30 pm. Gorilla Falls Exploration Trail with open from 9:30 am to 4:30 pm and Maharaja Jungle Trek will open from 10 am to 5 pm.