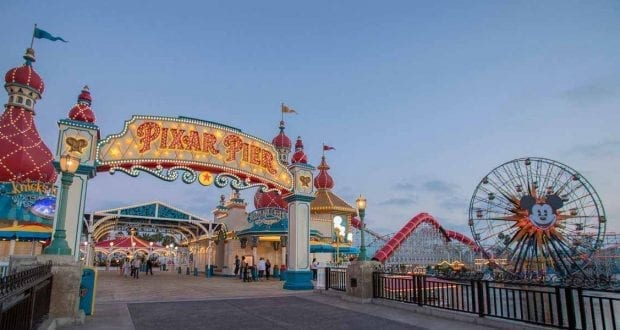 1 – Race with the Parr family on the Incredicoaster

The Incredicoaster is the first ride-through attraction in the world to feature beloved characters from “The Incredibles” franchise. On this super-fast attraction (the fastest at the Disneyland Resort), guests are launched alongside the Incredibles on a mission to chase after the elusive baby Jack-Jack, a storyline that will connect with fans of Disney and Pixar’s film, “Incredibles 2.” Exciting character figures, special effects, lighting, music, and distinctively colored vehicles make the thrills on this coaster even more incredible.

The Pixar stories that guests have come to know and love are presented through themed neighborhoods along the boardwalk of Pixar Pier, where guests will encounter some of their favorite Pixar characters. Guests join a celebration in honor of the Parr family in Incredibles Park, shrink down to the size of a toy in the Toy Story Boardwalk, and tour the charming seaside Pixar Promenade, celebrating all the heartwarming stories and characters from Pixar films. The fourth neighborhood, Inside Out Headquarters, features a the family-friendly attraction, Inside Out Emotional Whirlwind. 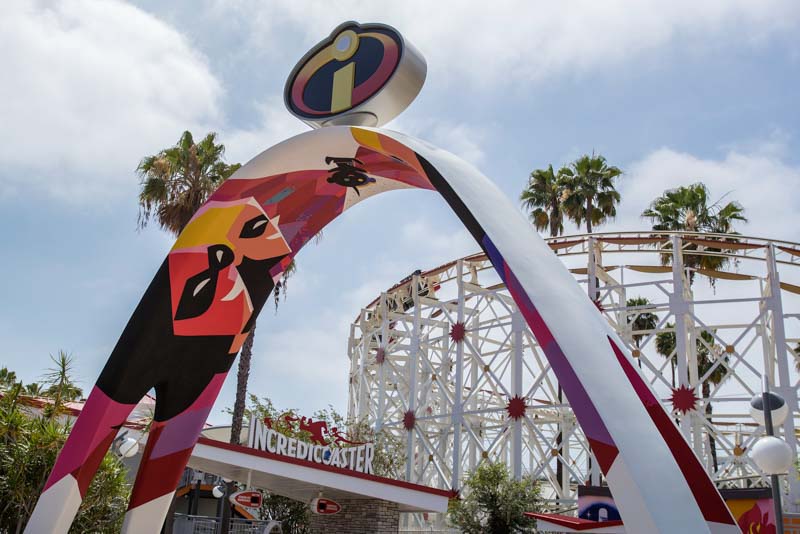 The restaurant welcomes the entire family with playfully presented food, unique signature cocktails and décor that celebrates the creativity, inspirations and personalities of the artists and storytellers who have brought Pixar films to life. The Disneyland Resort culinary team has also developed delicious menu items such as the carne asada roll with Fresno chili salsa, potato skins with brown butter-caper yogurt, and – for the budding artists – a creamy PB&J roll served with a flowerpot full of veggies, hummus and fresh fruit. Lamplight Lounge also has a new a la carte brunch menu offered on weekends.

4 – Test Your Skills at the Games of Pixar Pier

5 – Take a Spin on the Pixar Pal-A-Round

The focal point of Pixar Promenade, the Pixar Pal-A-Round celebrates the stories and friendships from many Pixar films. Each of the 24 gondolas on the Pal-A-Round features a different Pixar pal and offers breathtaking views of Pixar Pier.

6 – Enjoy Eats and Treats Inspired by Pixar Characters and Films

Food offerings inspired by Pixar feature films and short films can be found throughout Pixar Pier, including:

Stroll around the various neighborhoods of Pixar Pier to meet many favorite Pixar characters including Edna Mode, Frozone, Russell and Dug and more! 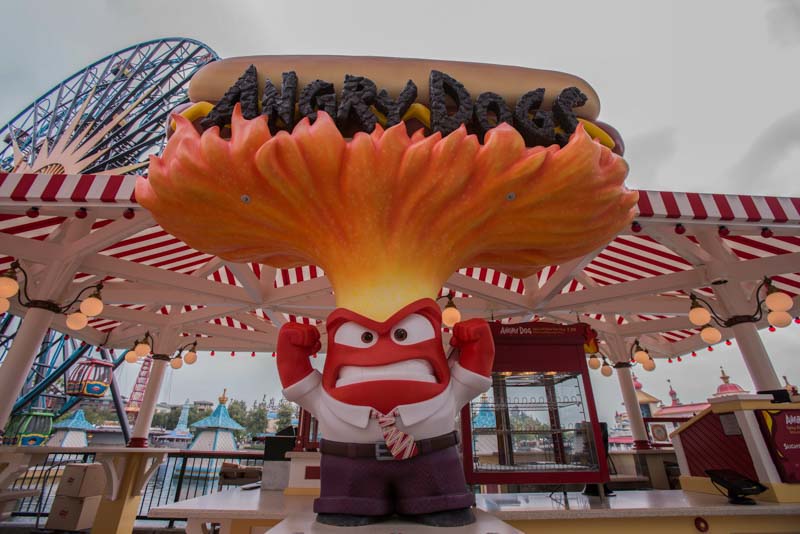 Angry Dogs in Pixar Promenade offers hot dogs, chips and beverages in an open-air walk-up location on the waterfront. Anger, the outrageously fun character from Disney-Pixar’s ‘Inside Out’ stands 35 inches high on a light stand and true to his nature, he is angry. The raging orange-red flames from his forehead appear to roast spicy and not-so-spicy hot dogs for guests. (Joshua Sudock/Disneyland Resort)

Potato Head welcomes guests as they become honorary toys and compete in target-themed games hosted by friends from the Toy Story movies. Guests try to hit secret targets to unleash “Easter eggs”—new and exciting game targets worth even more points.

You’ll want to strike a pose at the new Pixar Pier marquee, Boardwalk billboards, or the Pixar Promenade fountain. From the moment guests enter the land through the dazzling Pixar Pier marquee, they encounter picturesque locations that include scenic billboards, a kugel fountain inspired by the iconic Pixar ball, and views of the shimmering shores of Paradise Bay.

10 – Check out Pixar-Themed Merchandise and Treats