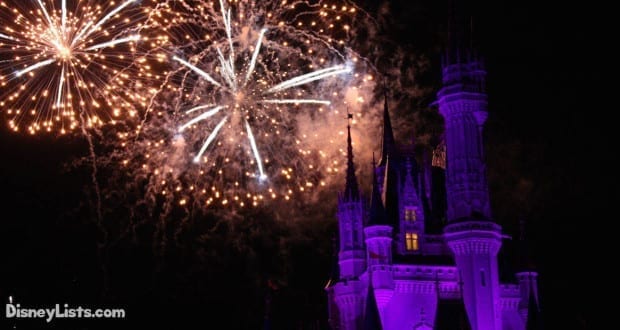 Posted by: Ryan Miller in The Parks

During the day, the parks at Walt Disney World shine brightly as your eyes are drawn to the vibrant colors of the attractions and the lush greens of the landscapes. But when the sun goes down, the parks take on a whole new feel visually. No longer lit by sunlight, the parks rely on the atmospheric lighting and the ambient light of the moon to draw the attention of your eyes.

Disney Imagineers have carefully designed the parks to not only make sure that guests can see all of the attractions, but to enhance them, giving each a very different feel in the evening. Some attractions can look completely different in the dark, making for a uniquely different experience as you explore the parks. To celebrate the hard work of the Imagineers, we have put together a list of the 13 most beautiful places at night in the parks.

When the sun hits the rocky tree-covered mountain of the Seven Dwarfs Mine Train, you can really see all of the detail in the meticulously kept landscape, but at night, the ride takes on a different personality. With only the lanterns to light the track ahead, there’s a little more mystery involved in the ride over and through the mountain. As the warm yellow light from the lanterns covers the ground below, the rock formations above are cast in a blue glow, looking like moonlight to make a beautiful contrast of color. The Jungle Cruise at night provides guests with a much darker tour through the rivers around the world. With the only light source coming from your boat, you’re unlikely to see anything until it’s right alongside you, where you will get a whole new perspective on the sights as large shadows are cast along the scenes and animals. Don’t worry, though, you’ll still get as many puns as you would during the daytime.

In keeping with the theme of “the future that never was,” Tomorrowland carries on the sci-fi atmosphere by circling each attraction and building in the land with a bright red, blue, and green light. The bright combination of colors not only makes it seem futuristic but also out of this world, and there’s no better vantage point than aboard the Tomorrowland Transit Authority PeopleMover where your tour through Tomorrowland takes on a different feel as you take in the sights at night.

Each of the 11 countries around the World Showcase Lagoon takes on a different personality once the sun goes down. With lights either surrounding the buildings in the pavilions or ambient lights guiding you through the architecture, it’s hard to truly appreciate how beautiful it all is until you look out across the lagoon and see the countries side-by-side. In anticipation of Epcot Forever, the torches in the water are lit, and the fires burn brightly to mark each pavilion surrounding the lagoon. The entire scene makes for a great backdrop should you wish to find a prime viewing location for the nighttime spectacular.

Rivers of Light is here! This is a remarkable water show with incredible floats, lights, and lasers displaying the beauty of all things living! Animal Kingdom can’t bring fireworks to the park for the sake of the animals present, but the lighting effects rival that of Epcot Forever at Epcot. You don’t want to miss this!

During the day, the sun beats down on the rock formations around the mountain and the radiant heat keeps riders warm as they travel on their journey with Br’er Rabbit. At night, the mountain cools off and only the light from the lanterns reveals the path of the water outdoors. Climbing through caves, the dark outline of the rock can be seen against the night sky, adding to the atmosphere. The most well-lit part of the attraction is the final plunge, where guests who are watching see only a moment of the log before it drops into the Briar Patch below.

It’s hard to imagine visiting Hollywood Studios without seeing Fantasmic at night. At the North end of the park, the Fantasmic amphitheater surrounds a large moat and the mountain where guests take a look inside the dreams of Mickey Mouse. There are incredible lighting displays, lasers, pyrotechnics, and the fantastic water screens used throughout the performance, and the mountain comes to life through many different scenes. Sticking with Hollywood Studios, it’s hard to beat the view down Sunset Boulevard with a perfectly paved roadway with quaint shops on either side heading down to the menacing-looking Hollywood Tower Hotel in the distance. With the green and white lights illuminating the Tower sign looking like they could burn out at any moment (with some already burnt out), an ominous feeling wells up inside you as you walk towards it, hearing the screams of guests coming from the windows. At night, there is a deep blue hue to the lights cast onto the tower, giving it a dark glow that sets the stage perfectly for the story about to unfold.

The iconic Spaceship Earth at Epcot is a bright reflective geosphere during the day, but at night, it relies entirely on artificial light to bring it to life. A solid color would be too bold, so a combination of colors shine onto the enormous attraction. Yellows and reds transition into beautiful blues as the icon fits in perfectly with its surroundings, never being too jarring, but adding the right amount of ambient light, while also making for the perfect backdrop for pictures. Over in Frontierland, the Big Thunder Mountain Railroad is a bright, dry, and hot locale during the day, taking guests on a runaway Mine Train through the ghost town of Tumbleweed. At night, the ride takes on a totally different persona, with some parts of the ride only visible at night. The shadows in the caves, skeletons, and rock formations add a sense of danger as you don’t know where the train will take you next. But in the town of Tumbleweed, the lights are on inside the buildings, giving you a look into the goings-on while rushing by. For any Disney Fan, Big Thunder Mountain Railroad is a must-do both during the day and especially at night, to get the full effect of the ride.

In Star Wars films, exotic locales function almost like characters unto themselves, setting the tone for the adventures to come. In the same way, exploring the 14-acre Star Wars: Galaxy’s Edge is an attraction experience all its own at Disney’s Hollywood Studios. Star Wars: Galaxy’s Edge comes alive for guests as they play roles in their own Star Wars stories. Whether using the Play Disney Parks mobile app, encountering Star Wars characters, or interacting with Disney cast members, guests engage with this new land in ways never experienced before in a Disney park. The experience is even more spectacular at night. The lighting on the Millenium Falcon is gorgeous. Nighttime is the perfect backdrop for running into Kylo Ren and his Stormtroopers. The entire land has an entirely different feel at night, so be sure to visit during the evening as well as the daytime! 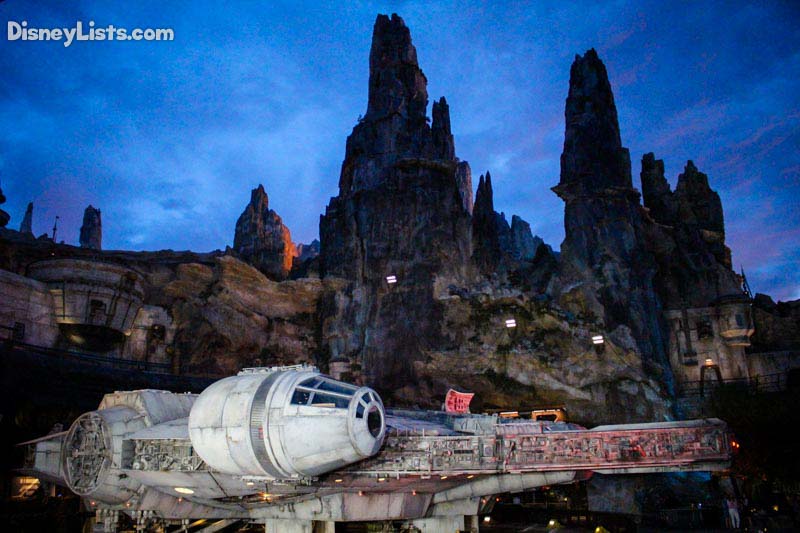 Pandora-The World of Avatar, the largest expansion in the history of Disney’s Animal Kingdom, is based on Oscar-winning filmmaker James Cameron’s record-breaking box-office hit, Avatar, which was released in 2009. The film was insanely popular, mostly due to Cameron’s amazing special effects. The land is a fantastic spectacle of Disney Imagineering, creativity, and story-telling. As you explore the vibrant terrain sprawling beneath mountains that appear to float in the sky, you’ll see waterfalls cascading down the mountainside into meandering streams and pools. Then you’ll discover two thrilling new expeditions: Avatar Flight of Passage and Na’ vi River Journey. Grab a bite to eat at the quick-service restaurant, Satu’li Canteen, or grab a drink and snack at Pongu Pongu. At night the land transforms into an entirely new experience. The bioluminescent plants of Pandora illuminate the land at night, giving breathtaking views of the Pandora landscape that are entirely different from the daytime experience. You don’t want to miss Pandora after dark!

It would be difficult to end this list with something other than the most iconic sight in Walt Disney World. Cinderella Castle is cast in several different colors at night, transitioning between them without guests noticing the changes. The glow on the castle makes for a breathtaking view in the heart of the Magic Kingdom. Once Happily Ever After Nighttime Spectacular starts, it becomes the focal point for thousands of guests, making for the perfect setting for fireworks. Add to that the projections shown on the castle during Once Upon a Time, and it truly is the most beautiful place at night in Walt Disney World

Ryan loves all things Disney: from the smallest details to the biggest surprises and all of the magic in between. He loves the fireworks of Wishes, the thrill of Tower of Terror and of course, the dining at Disney Restaurants. As of yet, however, he has been unable to replicate his favourite dishes and snacks at home. In between trips, you can usually find him reading about the history of the parks and attractions when he’s not at work for his local public library in Burlington Ontario. Ryan’s favourite Disney moment was proposing in front of Cinderella’s Castle to his (now) fiancée, Lauren.