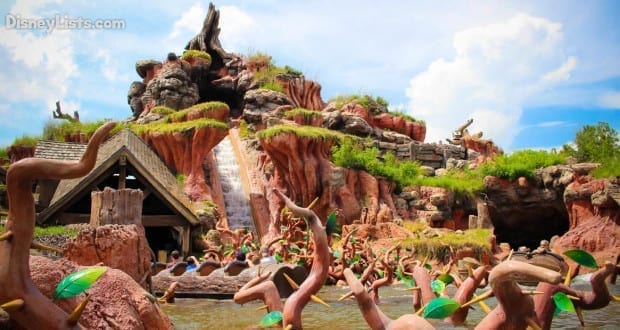 9 Facts and Secrets About Splash Mountain at Disney World

Splash Mountain is a beloved favorite, especially on the really hot days when guests want to beat the heat and cool off.  The attraction is fun to watch from outside, as you can see the guests drop (and you might even get a splash of your own), but the ride is even more fun to ride!  Here are several awesome facts and secrets about Splash Mountain.

Editor’s Note: Disney has announced that Splash Mountain will be reimagined to a Princess and the Frog theme. Learn more by clicking here.

Yes, you read that right!  You get to drop 52 thrilling feet during the longest drop on the attraction.  If you time your ride just right, you could also see the amazing fireworks from the Magic Kingdom as you drop, too!  You will definitely get a bit wet after you reach the bottom, too! The view from Splash Mountain

The original planned name for this attraction was actually “Zip-a-Dee River Run.” So how did we end up with “Splash Mountain”? Michel Eisner considered changing directions and wanted to promote “Splash,” the new (at that time) mermaid movie with Tom Hanks. He came up with the name “Splash Mountain” as part of the concept for that direction. The idea never took off, but the name stuck around!

7 – Brer Rabbit and Wakko Warner are the same voice.

Wakko Warner is a popular character from Animaniacs (Warner Brothers). Jess Harnell is the voice for both Wakko Warner and Brer Rabbit!

6 – The attraction is based on a movie that Disney has since tried to distance themselves from.

Have you ever heard of or seen “Song of the South”? If you haven’t, you won’t be able to find this one in stores and will have to look for a copy from another country. This movie received a lot of bad press over the years for being a racially offensive movie to African Americans with various considered to be racist slurs. The ride is the only reminder left of the movie that Disney has kept going. The ride doesn’t include any of the controversial issues and just focused on one of the stories that Uncle Remus tells.

5 – Brer Rabbit’s attempted demise is changed from the movie.

In the original story from the movie, Brer Fox uses a “tar baby” (a doll made from turpentine and tar that appears to resemble an African-American baby) to trick him and resulting in him getting stuck in the tar. In the attraction, Brer Rabbit gets caught in a honeycomb instead. We are glad that they didn’t recreate the original story for the attraction, as it likely wouldn’t have gone over very well at all. 4 – Zip-A-Dee-Doo-Dah is the only remaining Song of the South song that Disney plays.

So we already talked about how Disney really wants to forget about the movie “Song of the South” and what was included in it. However, the song Zip-A-Dee-Doo-Dah is still a popular Disney fanfare that is played in the parks and appears on various soundtracks. It is the only song from the movie that you can find on soundtracks, even though other songs are heard during different sections of the attraction.

3 – The drops are different at all 3 of the Disney parks.

The height of the drops at each of the 3 locations that have Splash Mountain (California, Florida, and Tokyo), but the amount of drops and the details of the drops themselves are different. The drops are at varying steepness, creating different ride experiences depending on which one you ride. I think this means that we all need to go to all of these locations and ride each one so we can decide which one is better!

There are actually a few different points where you could get wet. There are geysers that shoot, waterfalls that could drench one side of your log vehicle, backsplash from the drops, and more. To give you an idea, there are around 950,000 gallons of water in this attraction, so that is plenty of water that can end up giving you a big splash! 1 – What does the flashing street lantern in the loading area mean?

You may have noticed that there is a lantern that flashes from time to time in the area where you are boarding your log vehicle. Well, the big secret is…. It lets cast members know that the logs are about to move in the station so that they are prepared for guests to move out and the next guests to disembark. You will actually notice this in place on many attractions if you keep an eye out in the loading area.