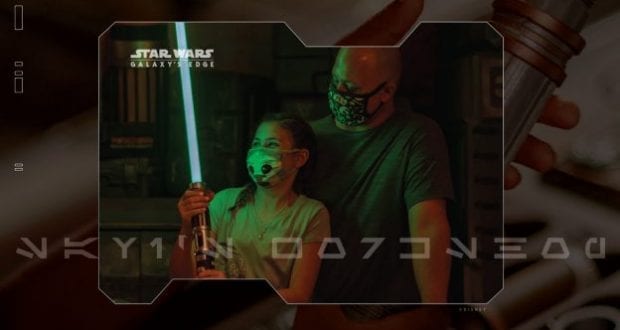 The Force will soon be flowing once again inside Savi’s Workshop – Handbuilt Lightsabers in Star Wars: Galaxy’s Edge at Disney’s Hollywood Studios in Florida. Beginning September 20, the Gatherers will invite you into this mysterious shop in Black Spire Outpost to train you in the ways of constructing a lightsaber.

Savi’s Workshop is packed with unusual parts and whimsical pieces collected from the far reaches of the galaxy. Under the mystical Gatherers’ guidance, you construct a one-of-a-kind lightsaber and bring it to life through the power of a kyber crystal. You can build your lightsaber along one of the following themes:

For those who may have visited the shop in the past, you’ll notice the experience will be slightly adjusted. For instance, capacity will be reduced to allow for physical distancing between guests in accordance with the park’s guidelines during its phased reopening. 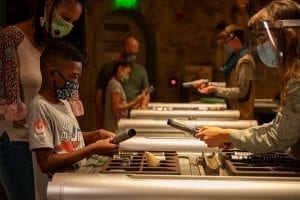 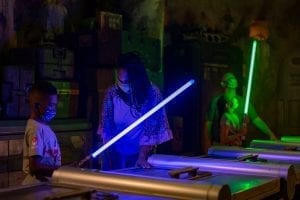 At more than 14 acres, Star Wars: Galaxy’s Edge is the largest single-themed land in Disney Park history, packed with immersive storytelling that allows guests to live their own Star Wars adventures. There is so much to take in while exploring the new land at Disney’s Hollywood Studios in Florida! To help, here are 10 “must-do” experiences for guests inside Star Wars: Galaxy’s Edge:

10 – Craft a Lightsaber and Build a Droid

Constructing a lightsaber is a rite of passage in the life of a Jedi, as this elegant weapon from a more civilized age is attuned to its owner through the Force. Guests in Savi’s Workshop – Handbuilt Lightsabers feel the presence of the Force as they craft their own lightsabers, customizing them with various hilts, décor and the all-important kyber crystals.

Pro tip: This is an amazing experience that will likely be a huge draw Star Wars uber fans. While the experience is expensive, being able to build your own lightsaber while being instructed by a master builder is an unforgettable experience. One builder and one observer may enter together. Reservations are strongly recommended. Click here to check for availability.

Droids can be some of the most loyal companions in the entire Star Wars galaxy, and now guests have the chance to build and customize their own astromech friends at the Droid Depot. Patrons pick pieces and parts off a conveyor belt to construct one of two core models (R-series or BB-series), which can then interact with elements throughout Star Wars: Galaxy’s Edge.

Pro tip: This experience is a whole lot of fun, especially for the younglings. Take your time and enjoy the process. Reservations are strongly recommended. Click here to check for availability.

When accessed inside Star Wars: Galaxy’s Edge, the Play Disney Parks app transforms guests’ mobile devices into their very own Star Wars: Datapad. You can then scan the contents hidden inside containers, translate languages, and tune into communications happening throughout the land. Guests can also use this tool to hack into droids and door panels (what the locals call “slicing”) to unlock additional stories.

Pro tip: This is a great activity for the whole family. Be sure to stop by the Droids to bring them to life! See the app in action by watching the short video below.

Black Spire Outpost in Star Wars: Galaxy’s Edge is home to a bustling marketplace, full of vendors showcasing wares from across the galaxy. Guests can pick up authentic Batuuan attire with a stop at Black Spire Outfitters, start a collection of toys at Toydarian Toymakers, or peek into the cages in the Creature Stall. The marketplace’s twisting pathway is just waiting to be explored, with something new to see seemingly around every turn.

Pro tip: This area is a lot of fun and worth exploring. You’ll find a lot of unique items you won’t find anywhere else. Looking for Star Wars souvenirs? You won’t find any! The items you’ll find in the marketplace are items that inhabitants might buy, and so you won’t find items that say, “Star Wars.” The one exception to the “no Star Wars” rule is the reusable bags available for purchase within the marketplace. However, you will find plenty of items (patches, magnets, keychains, bags, postcards) with “Black Spire Outpost,” just like you might find those kinds of souvenirs when traveling to a new destination.

7 – Discover Hidden Gems to Look for In the Land

Pro tip: There are many “Easter Eggs” throughout the land that are just waiting to be found. There are Hidden Mickey’s and plenty of nods and artifacts from the films that make the whole experience feel like you’ve just stepped into the Star Wars Universe. Take the time to explore the land for these fun finds during your visit.

6 – Grab a Bite to Go at Ronto Roasters

Whether it’s the large podracing engine hanging overhead, the former smelter droid turning a spit of meats or just the savory smells wafting by, Ronto Roasters is sure to grab guests’ attention. This quick-service location offers mouth-watering Ronto Wraps and sweet-or-spicy Nuna Turkey Jerky, as well as a selection of specialty beverages.

Pro tip: The offerings at Ronto Roasters are tasty and filling. Be sure to use the Mobile Ordering service if the line is too long!

Ever since Luke Skywalker sat down for a family meal in “Star Wars: A New Hope,” Star Wars fans have had this burning question: What does Blue Milk taste like? Now at Star Wars: Galaxy’s Edge, they finally have their answer. The Milk Stand in Black Spire Outpost offers both Blue Milk and Green Milk, delicious frozen blends with dashes of fruity accents. The Blue milk has berry and melon flavors while the green milk has lemon and other citrus flavorings. Not a milk fan? Don’t worry! This “milk” is actually a non-dairy frozen plant-based blend of coconut and rice milk so that all guests can enjoy it!

Pro tip: We don’t want to spoil the experience for you, so we’ll let you decide which one you prefer. Both are good and which one is better is up to you. Cindy went into it hearing one was worse than the other and ended up liking the one that was supposed to be not as good. We also suggest asking for an empty cup and mixing them together. Cindy preferred the blended flavor the most. When buying both flavors, you’ll have a lot of milk on your hands, so grab some friends for taste testing! Also, while you can get Blue Milk at Oga’s Cantina, it is not frozen like it is at the Milk Stand.

4 – Be on the Lookout for Kylo Ren, Rey, and Other Star Wars Characters

Guests should keep their eyes open as they explore Star Wars: Galaxy’s Edge, because they may encounter heroes of the Resistance or agents of the First Order. Supreme Leader Kylo Ren lands at Black Spire Outpost and gathers Stormtroopers to help him hunt for Resistance fighter Rey. Guests may also encounter Millennium Falcon co-pilot Chewbacca or Resistance spy Vi Moradi.

Pro tip: It’s a lot of fun watching and interacting with the characters, especially the Stormtroopers!

3 – Drop by for a Drink at Oga’s Cantina

The heartbeat of Black Spire Outpost, Oga’s Cantina is a place where even the blaster-bolt scorches on the walls tell a story. Guests can gather to share their own tales from around the galaxy as they enjoy exotic beverages served in unique vessels and listen to spirited musical entertainment from DJ R-3X, the former droid pilot from Star Tours. Whether sidling up to the cantina’s counter or sliding into one of the establishment’s back booths, this is the best place to catch up on local gossip, make a new friend or form a new alliance.

Pro tip: This was our favorite experience on opening day. The atmosphere is lively and reminded us a bit of Trader Sam’s. This will be a popular hangout for many. Reservations are recommended. Click here to check for availability.

2 – Fly the “Fastest Hunk of Junk in the Galaxy” in Millennium Falcon: Smugglers Run

The Millennium Falcon is a Star Wars icon, and Star Wars: Galaxy’s Edge makes dreams come true for guests who’ve wished to step aboard the “fastest hunk of junk in the galaxy.” In Millennium Falcon: Smugglers Run, they strap into the Falcon cockpit and take the controls as pilots, gunners or flight engineers on a mission to deliver smuggled goods while avoiding any … unnecessary entanglements.

Pro tip: For those who suffer from motion sickness on rides, this attraction is less much intense than Star Tours. Cindy was able to ride it without too much trouble but did feel a bit uneasy afterward. Since everyone reacts differently, proceed with caution.

1 – Fight the First Order with Star Wars: Rise of the Resistance

Star Wars: Rise of the Resistance sets a new standard for what a Disney theme park experience can be, as guests become heroes of the Resistance in a climactic battle with the First Order. In one of the most immersive, ambitious and technologically advanced attractions ever created for a Disney park, guests launch into space aboard a transport shuttle, only to be captured by a Star Destroyer and pursued by Supreme Leader Kylo Ren as they frantically search for a way to escape the clutches of the First Order.

Pro tip: Unlike any other attraction at Walt Disney World, you cannot simply just get in line to enjoy this attraction. You must join a “boarding group” to ride. Click here for everything you need to know about how to experience this amazing attraction.