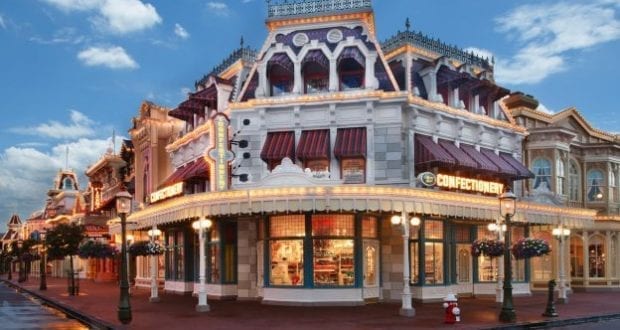 NEWS: New Look in the Works for Main Street Confectionary at Magic Kingdom

As Magic Kingdom Park prepares to get ready for the 50th Anniversary celebration beginning this fall, we’re beginning to see more and more locations getting refurbished ahead of the celebration. Main Street Confectionary will be closing soon for a refurbishment. Learn more below.

Here are all the details from Disney Cast Member Laurel Slater:

Today, I’ve got some SWEET news to share about exciting work happening at Magic Kingdom Park as we prepare for the beginning of The World’s Most Magical Celebration at Walt Disney World Resort this October!

Kicking things off, let’s talk about Main Street Confectionery. Having worked as a leader there in the early 2000s, I know how important the sweet smells, tasty treats and wonderful cast are to our guests. That’s why I’m delighted to share that this iconic location will soon receive a fresh new look, expanded layout with more room to shop and interactive opportunities to customize your confections like never before.

To bring these concepts to life, both Main Street Confectionery and The Chapeau will close for refurbishment later this month. Along with that, some of the merchandise and goodies will be shifting to other spots in the park. Now don’t worry, you’ll still have plenty of options to satisfy your sweet tooth once work to transform the locations kicks off on March 29. Many of the treats from Main Street Confectionery will be available at Emporium and Main Street Cinema during the closure. And have no worries about where to find your favorite Disney hats, including the must-have Mickey Mouse ears. Those will be just across the street at Box Office Gifts, at the Town Square Theater. Finally, if you’re looking for collectibles and artwork, Bonjour! Village Gifts will be the new go-to spot. 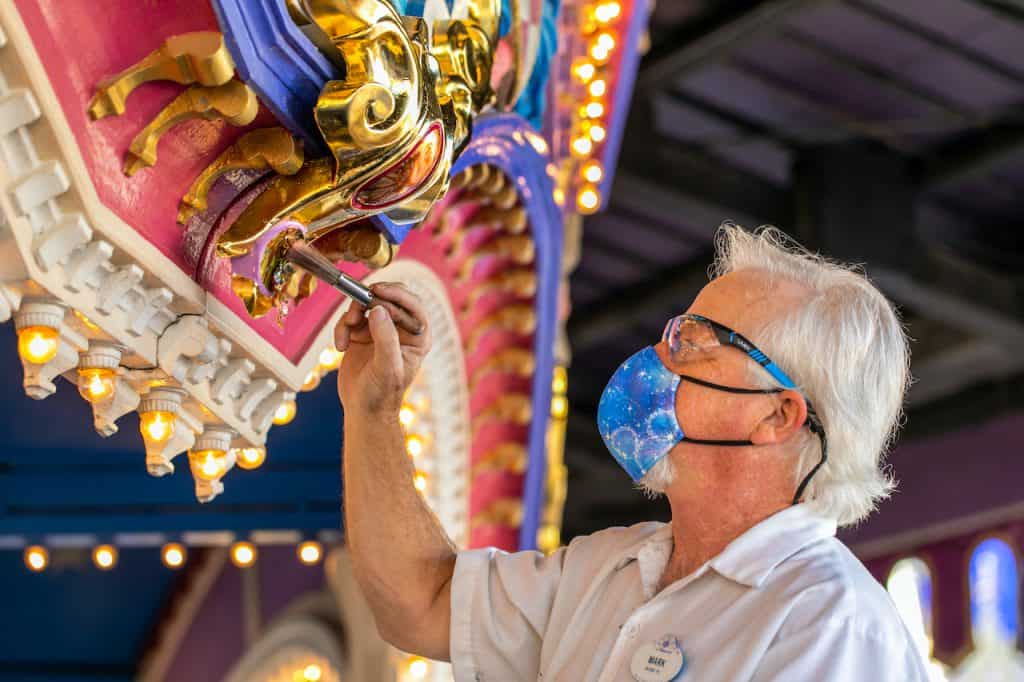 Outside of the world of merchandise, you may have noticed some other updates taking place around the park recently. Whether it be a freshly painted castle turret being adorned with 50th anniversary décor, or shimmering gold leaf being added to your favorite Fantasyland attractions, our cast members are hard at work making Magic Kingdom Park shine like never before. Be sure to keep an eye out for these enhancements and more in the coming months!

We’ve been eagerly awaiting details on the 50th Anniversary celebration of Walt Disney World. That’s why we’re excited to share details and photos of what guests can expect during the celebration! Learn more below.

1 – A Celebration 50 Years in the Making

On Oct. 1, 1971, Walt Disney World Resort officially opened to guests for the first time, the culmination of years spent imagining, planning, and developing Walt Disney’s magical dream. In the five decades since the vacation destination continued to expand with new stories and characters and adventures to cherish for a lifetime. And now with a major milestone approaching, guests can share in “The World’s Most Magical Celebration” beginning October 1, 2021, in honor of the resort’s 50th anniversary. 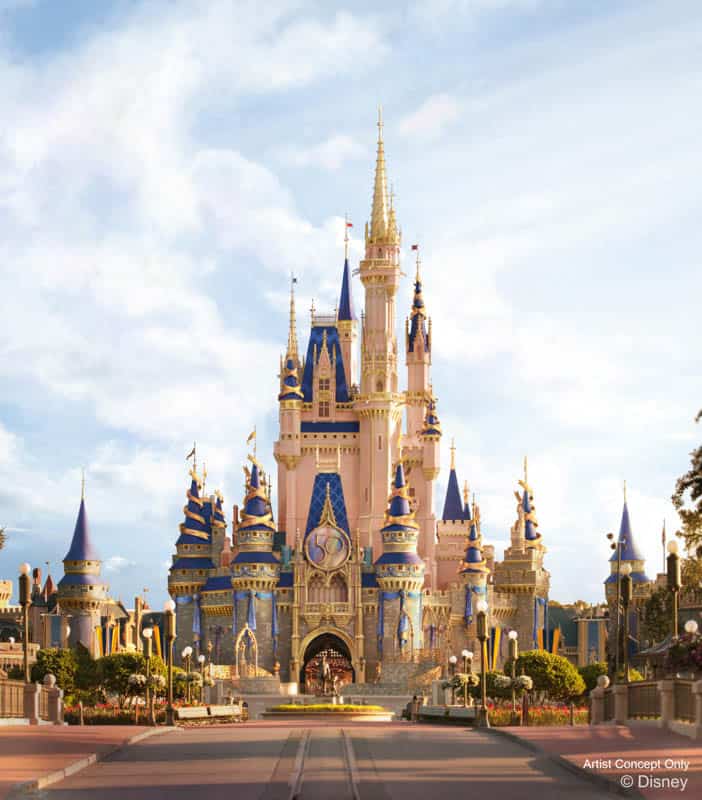 In this artist rendering, Cinderella Castle shines with new golden and EARidescent décor at Magic Kingdom Park as part of “The World’s Most Magical Celebration,” which begins Oct. 1, 2021, in honor of the 50th anniversary of Walt Disney World Resort (Credit: Disney)

This 18-month celebratory event will feature new experiences at the resort’s four theme parks and beyond, where shimmering EARidescent décor will appear as if by magic. Shining at the center of it all will be Cinderella Castle at Magic Kingdom Park, which will add to its royal makeover from 2020 with new gold bunting, sparkling golden embellishments and other new enhancements, including a 50th anniversary crest warmly welcoming guests to the join the festivities.

As part of “The World’s Most Magical Celebration,” icons at each Walt Disney World theme park will transform into magnificent Beacons of Magic at night, coming to life with their own EARidescent glow. 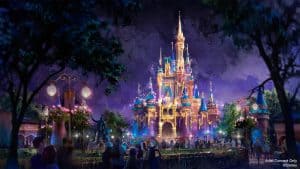 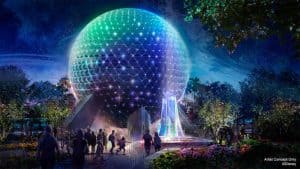 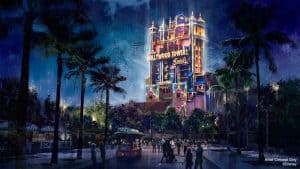 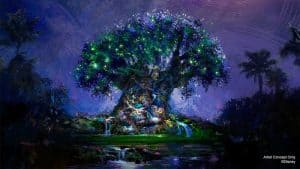 4 – Mickey and Minnie – Dressed for the Occasion

As hosts of “The World’s Most Magical Celebration,” Mickey Mouse and Minnie Mouse will be dressed in sparkling new looks, custom-made for this special occasion. Highlights of these celebratory designs include beautifully embroidered impressions of Cinderella Castle backed by fireworks, as well as a brocade in multi-toned, EARidescent fabric – all punctuated with pops of gold.

Joining Mickey and Minnie, Walt Disney World cast members will be at the heart of this event. They will demonstrate yet again why they are renowned for their commitment to service, consistently exceeding guests’ expectations by going above and beyond to make visits to The Most Magical Place on Earth special.

The grand opening of Remy’s Ratatouille Adventure at EPCOT will be October 1, 2021. This new family-friendly attraction will officially debut as part of the kickoff for “The World’s Most Magical Celebration” honoring Walt Disney World Resort’s 50th anniversary.

Remy’s Ratatouille Adventure invites guests into the flavorful world of Disney and Pixar’s Academy Award®- winning “Ratatouille,” where they will feel as if they shrink to the size of Chef Remy and scurry through Gusteau’s famous restaurant. Guests will find Remy’s Ratatouille Adventure in a newly expanded area of the park’s France pavilion, where the real is made fantastic in a reimagining of Paris inspired by the film.

Also debuting October 1 in this section of the pavilion will be a delicious new restaurant, La Crêperie de Paris, offering both table- and quick-service options. The menu will feature sweet crepes, savory buckwheat galettes (naturally gluten friendly) and authentic French hard cider. The attraction, restaurant and pavilion expansion are all part of the historic transformation of EPCOT currently underway, bringing a breadth of new experiences to the park in a celebration of curiosity, discovery, and the magic of possibility.

We expect there to be a special presentation or event that will take place on October 1, 2021, the day the 18-mont celebration kicks off. Do note that if you want to be at Magic Kingdom that day, you’ll need a park reservation. At this time, there are no park reservations available for all three reservation types: theme park ticket, Disney Resort guest, and annual passholder. Disney has stated that right now they are operating at 35% capacity. We hope that in the future, capacity levels will be raised, and therefore, more availability will be offered for Magic Kingdom on October 1. If you have not yet secured your park reservation for Magic Kingdom, be sure to check the availability calendar often to see if availability has been added for that day. If and when Disney does add availability to October 1, we expect those new spots to be taken quickly. Generally speaking, Disney resort guests have the best chance for park availability, then ticket holders, and then annual passholders. We believe being a Disney resort guest will give you the best shot for a spot, but it certainly isn’t necessary. If you are thinking of visiting during this time, we highly recommend you make your resort reservations as soon as possible. There is also limited availability for resort rooms, so the earlier you book, the better your options will be. For more details and help booking your vacation, call our travel partners Magical Vacation Planners at (407) 442-0227. You can also get a no-obligation, FREE vacation quote by clicking here.  Their services are free to you and they can answer any questions you may have.

More details about “The World’s Most Magical Celebration” will be announced in the future.