We finally have an opening date for the highly anticipated Avengers Campus coming to Disney California Adventure at Disneyland Resort. Learn more below.

Here are all the details from Disney Cast Member Gabriel Bibaldi:

Super Heroes Assemble! As we’ve all been anticipating, I’m pleased to share that Avengers Campus – an entirely new land dedicated to discovering, recruiting, and training the next generation of Super Heroes – will open June 4, 2021, at the Disneyland Resort!

At this fully immersive land inside Disney California Adventure park, you will be invited to team up with the Avengers and their allies and live out your Super Hero dreams. Avengers Campus is comprised of several heroic locations, each hosted by a different Avenger to share their unique powers, technology and knowledge with recruits. Today, I’m also excited to unveil a first look inside Avengers Campus! 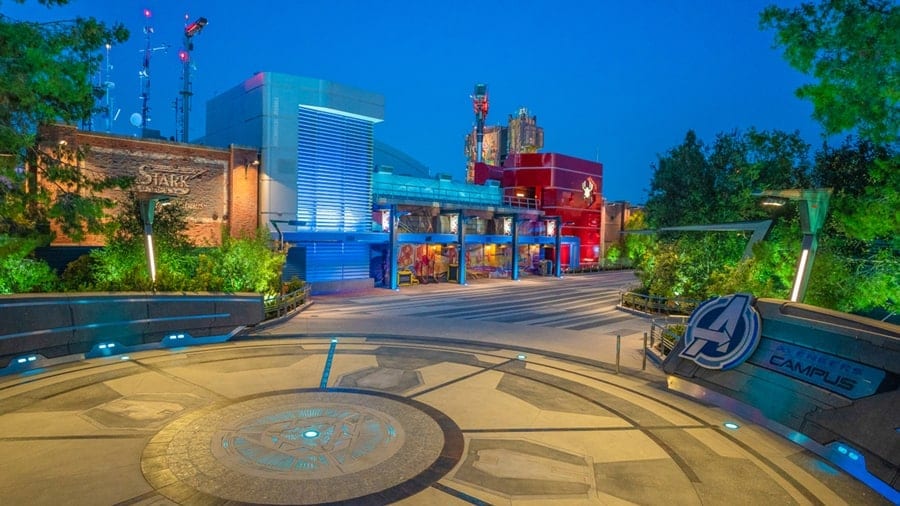 The first key area is the Worldwide Engineering Brigade – also known as WEB. It brings together bright innovators like Peter Parker who have been assembled by Tony Stark to invent new technologies and equip everyday people to become Super Heroes like the Avengers. WEB will house the new WEB SLINGERS: A Spider-Man Adventure, the first Disney ride-through attraction to feature the iconic friendly neighborhood Spider-Man!

We previously shared that Tom Holland will reprise his role as Spider-Man in the new family-friendly attraction, which invites you to put your web-slinging skills to the test and experience what it’s like to have powers alongside Spider-Man – a feat accomplished with innovative technology adapted specifically for this attraction, perfect for up-and-coming recruits of all ages.

The second anchor attraction looms high above the land, Guardians of the Galaxy – Mission: BREAKOUT!, a fan-favorite that opened in 2017. This rockin’ adventure blasts you straight into the “Guardians of the Galaxy” story, alongside characters from the blockbuster films and comics. As you help Rocket bust his fellow Guardians of the Galaxy out of the Collector’s Fortress, you will experience raucous mayhem, music inspired by the soundtracks from the movies, thrilling free-fall drop sequences and six different story lines! 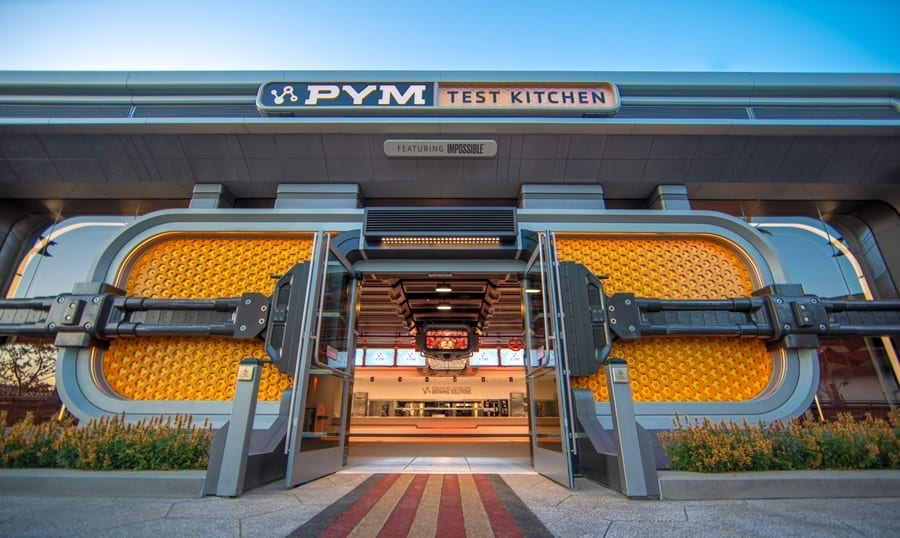 Power up with tiny treats and massive meals

When it is time to take a break from the heroics, several new dining spots at Avengers Campus will offer dishes that are rich in both flavor and storytelling. Pym Test Kitchen is a food innovation science lab where the food and drinks tell a story. Just as Ant-Man and The Wasp use “Pym Particles” to grow and shrink just about anything, Pym Technologies applies this science to the creation of shareable bites, inventive entrees and sweet treats. You will be able to savor such items as the Impossible™ plant-based large and micro meatballs with pasta, or the “Pym-ini,” a panini served by the slice or as a long, multi-portion sandwich. 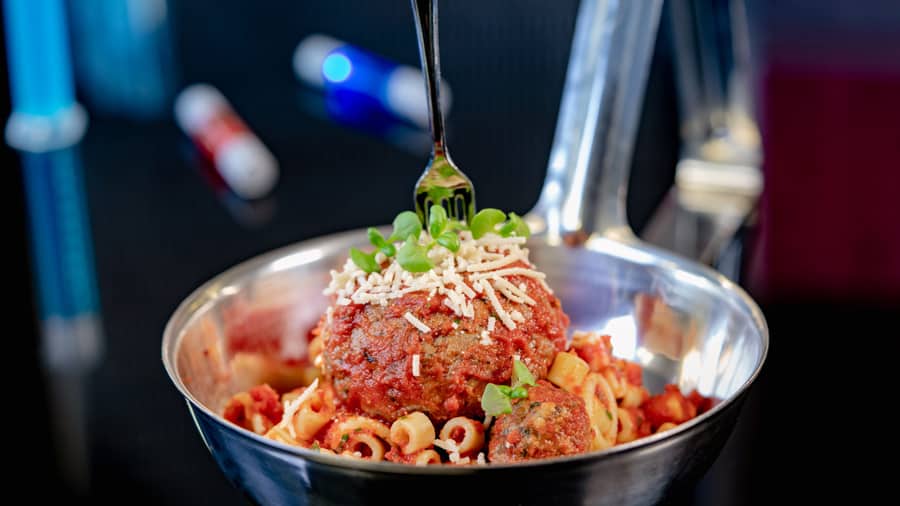 Adjacent to the Pym Test Kitchen, an oversized beer can overhead signals that grown-up beverage tastings are available at Pym Tasting Lab. You can order a craft beer, ranging from a blood orange hefeweizen to an amber lager, or try one of the Pym Research Staff’s Pym Particle-infused cocktail experiments. Both locations will offer mobile ordering via the Disneyland App.*

Visit one of The Avengers favorite food joints, Shawarma Palace. Enjoy a shawarma wrap at this food cart, which is decked out with memorabilia for Avenger fans. Lastly, Taneleer Tivan did not limit his collection to lovable misfits; he is also curating a weird and wonderful menu of intergalactic eats at the Terran Treats food cart near Guardians of the Galaxy – Mission: BREAKOUT!

Team up with the Avengers and their allies like never before

Throughout Avengers Campus, Super Heroes will come to life in more exciting ways than ever. You may have heroic encounters with Iron Man, Captain Marvel, Black Panther, the Dora Milaje, Black Widow, Ant-Man and The Wasp, the Guardians of the Galaxy, Thor and even villains like Loki, some of whom are making their first appearances at the park.

You may even have the chance to witness Spider-Man swinging into action high above Avengers Campus with gravity-defying, acrobatic feats never seen before in a Disney theme park. 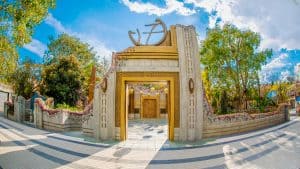 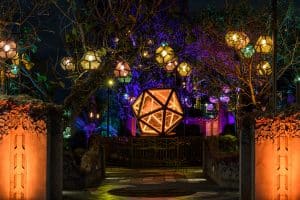 At a nearby ancient sanctum, Doctor Strange will train recruits in the mystic arts by bringing this ancient sanctum to life with powerful spells. At night, the area glows even more vividly with majestic colors and lights, pulsating with mystic energy. 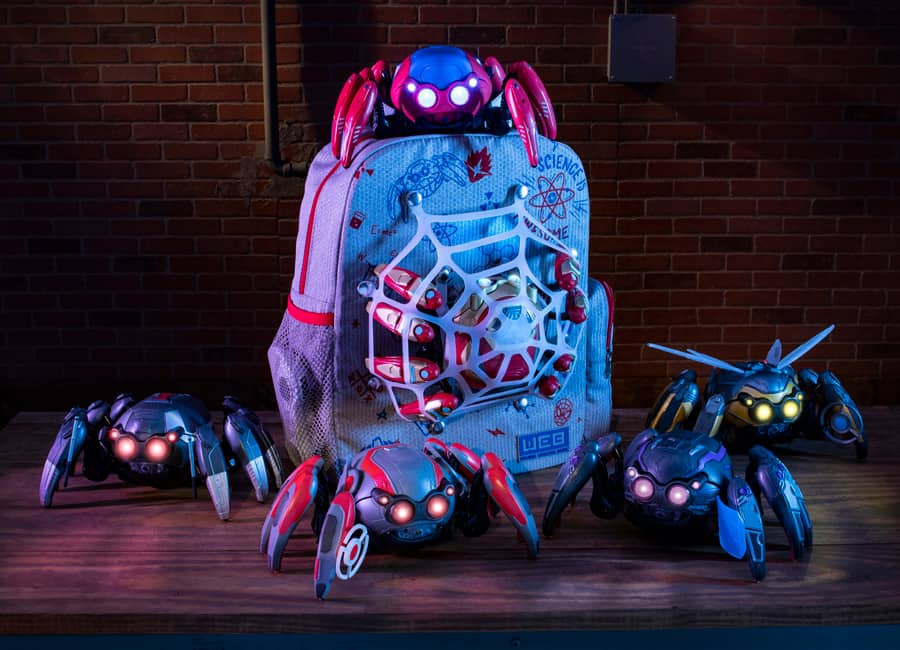 Suit up with the latest Super Hero gear

The WEB Suppliers store will offer the latest inventions, including interactive Spider-Bots much like the ones you will see in the new attraction, WEB SLINGERS: A Spider-Man Adventure. Each Spider-Bot has a remote control, and all eight articulated legs move forward and backward. You may customize your Spider-Bot with tactical upgrades to harness the powers and style of favorite Super Heroes, including Black Panther, Iron Man and Black Widow, as well as Ant-Man and The Wasp.

Other must-have items at WEB Suppliers include a specially-designed backpack to carry Spider-Bots when they are not in action, Spider-Man light goggles, a take-home spider web kit and Funko Pop! vinyl figurines of Spider-Man and Iron Man.

The Campus Supply Pod is the place to power up with official Avengers Campus gear, including performance fleece hoodies and tees, headwear, drinkware and other Super Hero supplies.

We are counting down the days till we can team up with the Avengers and their allies, sling webs with Spider-Man, taste-test inventive food and drinks and become part of a bigger universe alongside some of our favorite Super Heroes

Stay tuned for more epic updates. We hope to see you this summer at Avengers Campus!

*Message, data and roaming rates may apply. Availability subject to handset limitations, and features may vary by handset, service provider or otherwise. Coverage and app stores not available everywhere.  If you’re under 18, get your parents’ permission first.