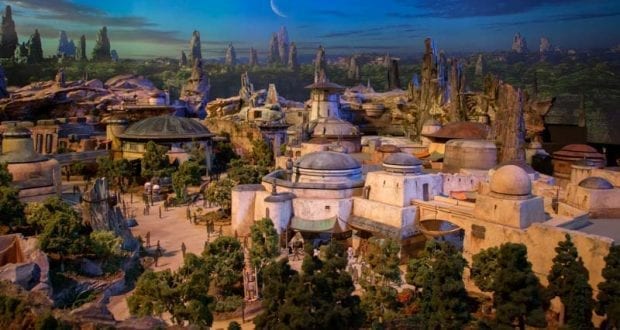 Bob Chapek, Chairman of Walt Disney Parks & Resorts, revealed the official name of the Star Wars-inspired lands that are currently under construction at the Disneyland and Walt Disney World Resorts, and shared details on the immersive experiences your Clients will be able to enjoy when the lands open in 2019.

The lands, both called Star Wars: Galaxy’s Edge, will allow guests to visit a remote trading port on the edge of wild space, where Star Wars characters and their stories come to life – and where Guests will find themselves in the middle of the action.

The lands will feature two major attractions that put guests in the middle of a battle between the First Order and the Resistance. Each attraction – and even the land itself – will offer guests the chance to immerse themselves in the Star Wars universe like never before.

One attraction will make guests feel like they’re on a Star Destroyer inside a hangar bay. It’s an attraction built on a scale we’ve never done before. The second attraction will give your Clients the opportunity to fly the Millenium Falcon, piloting the ship, shooting blasters or preparing for hyperspace – all while completing a critical mission. But how they perform on the mission holds even bigger stakes: perform with skill and they may earn extra galactic credits, while bringing the ship back banged up could put them on the list of a bounty hunter. End up on Harkos’s list and they may face a problem if they show up at the local cantina! Guests will also encounter many familiar faces inside Star Wars: Galaxy’s Edge, including BB-8, Chewbacca, members of the First Order and – among many others – Rex, the troublesome pilot fans may remember from the previous version of a certain Disney attraction who takes on a new role in this land as the DJ at the cantina.

And speaking of the cantina, here guests will be able to try unique concoctions like blue milk. Nearby, they’ll also be able to acquire trinkets and treasures from across the galaxy.

Check out photos of the detailed model of Star Wars: Galaxy’s Edge by clicking here.

Star Wars: Galaxy’s Edge will open in 2019, first at the Disneyland Resort and later in the year at the Walt Disney World Resort. (No further opening dates have been announced yet.)

To the delight of fans, Chapek also confirmed ambitious plans to create the most experiential concept ever in an immersive Star Wars-themed hotel at Walt Disney World Resort. Dedicated entirely to the galaxy of Star Wars, it will be a one-of-a-kind experience where a luxury resort meets a multi-day adventure in a galaxy far, far away. No news on when this will open.

Read about more of the huge announcements from D23 by clicking here.

RELATED ARTICLE BELOW: 9 Ways to Have a “Star Wars” Day at Disney’s Hollywood Studios

The building excitement around the return of Star Wars to theaters has been palpable. Star Wars mania is back and bigger than ever. Fans of the original series have grown up and can’t wait to share their love and excitement of the saga with their kids and grandkids. George Lucas and Disney World have enjoyed a long relationship that has brought the magic of the Indiana Jones and Star Wars movies into the parks. In August of 2015, Disney announced news that fans were waiting for: Star Wars Land would be coming to Hollywood Studios! While construction began in 2016, fans don’t need to wait until 2019 to experience a Star Wars themed day. Whether you are a young padawan or master Jedi, here are nine ways to have a Star Wars Day at Disney’s Hollywood Studios.