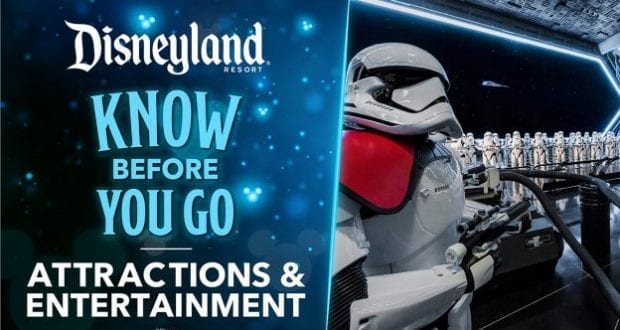 With just four weeks until Disneyland Resort opens, we’re getting more and more details on what guests can expect when both Disneyland park and Disney California Adventure park reopen on April 30. Learn about what you can expect with attractions and entertainment at both parks below.

Disney Cast Member Michael Ramirez has all the details below:

As we gear up for the planned reopening of Disneyland park and Disney California Adventure park on April 30, we’re excited to share details about the attractions and entertainment you will be able to experience on your next visit.

There will be plenty of magic to go around in different and new ways, including surprise appearances by favorite Disney friends! Plus, most of your favorite attractions will be available at both parks for you to enjoy. As we’ve noted previously, select attractions and certain experiences that draw large group gatherings—such as parades and nighttime spectaculars—will return at a later date. See full details on Disneyland.com. 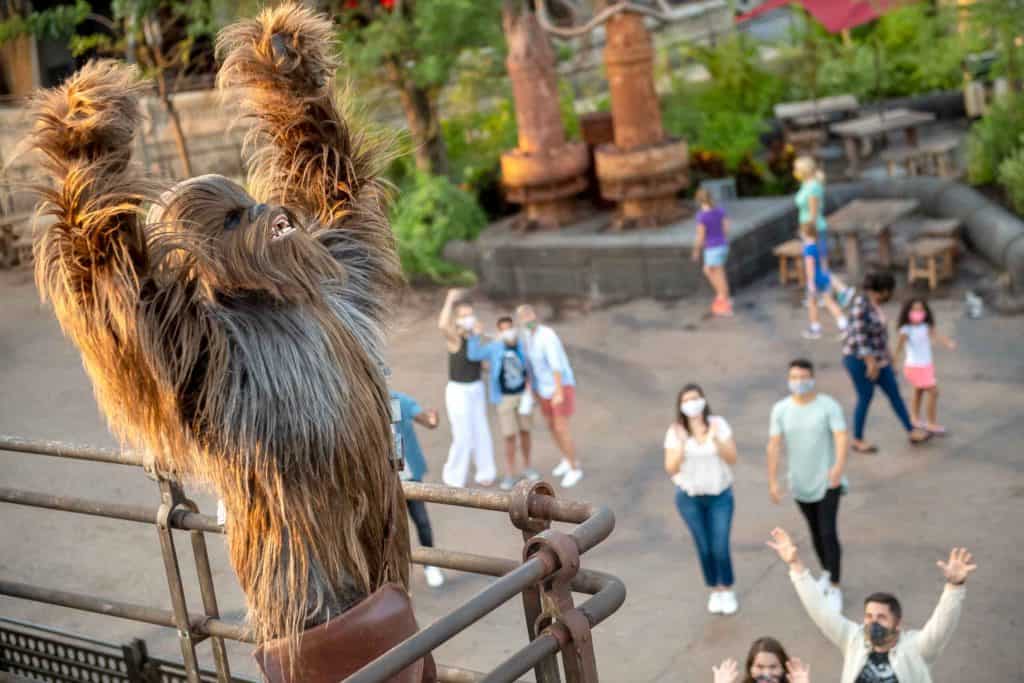 Travel to a galaxy far, far away

The remote planet of Batuu is waiting for travelers like you to live your own Star Wars adventure! While you explore Star Wars: Galaxy’s Edge, experience a climactic battle between the Resistance and the First Order on Star Wars: Rise of the Resistance or take control of the most famous ship in the galaxy aboard Millennium Falcon: Smugglers Run.

Upon reopening, we’ll continue leveraging a virtual queue system for Star Wars: Rise of the Resistance.* The attraction’s virtual queue is only accessible via the Disneyland mobile app, and you may only experience the attraction by joining the virtual queue. Distribution times for virtual queue enrollment will be twice daily, one in the morning, and one later in the day. Specific times and details will be shared at a later date on Disneyland.com.

You may also come across some familiar faces as you wander Black Spire Outpost, including Rey, Chewbacca and Vi Moradi. They may be spotted above the speeder garage at Black Spire Station. Watch out for Stormtroopers, along with Kylo Ren himself, patrolling a platform where a TIE Echelon starfighter looms. 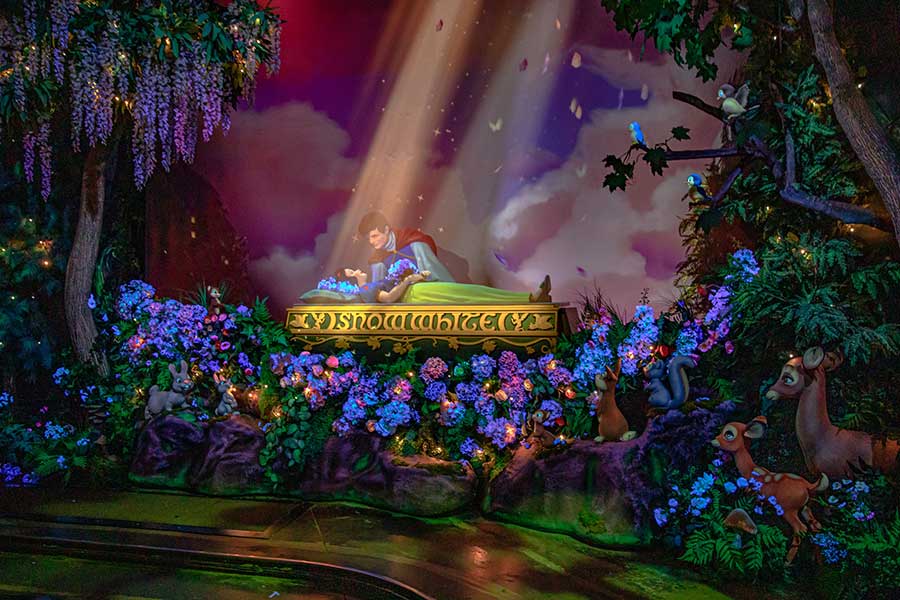 Hop aboard the wildest ride in the wilderness on the high-speed Big Thunder Mountain Railroad – a Disneyland park favorite – taking you past spires and buttes, and into tunnels and shafts of a dark and mysterious mine. If you prefer to rock out with Rocket, grove along to the tunes (and rollin’ drops) on Guardians of the Galaxy – Mission: BREAKOUT! in Disney California Adventure park.

For a dose of nostalgia in Disneyland park, check out the newly reimagined Snow White’s Enchanted Wish and freshly fancified King Arthur Carrousel in Fantasyland. Then visit the Haunted Mansion in New Orleans Square, home to 999 happy haunts and a few more spirited enhancements.

Favorite characters may be spotted throughout the day waving to visiting friends, posing in the background of photos and having fun playing in the parks. At Disneyland park, you may see Mickey Mouse and some of his pals from the steps of the Main Street, U.S.A. railroad station. Or perhaps they may be found outside their homes in Mickey’s Toontown, waving a friendly welcome to visitors of all ages.

You may also see Disney Princesses like Mulan or Belle at the Royal Theatre in Fantasyland or look to the beautiful balconies of New Orleans Square to catch sight of Captain Jack Sparrow. At Rancho del Zocolo in Frontierland, you might also catch intermittent appearances by Miguel from Disney and Pixar’s “Coco.”

Character sightings at Disney California Adventure park may include friends appearing at Carthay Circle and the Pixar Pier bandshell. Disney Junior stars, from Vampirina to Doc McStuffins, may say hello from the stage of the Disney Theater in Hollywood Land.

Step into your favorite Pixar stories

Zoom through Cars Land in Disney California Adventure park, and brake when you see Lightning McQueen, Mater and Red for photos along Route 66. Afterwards, it’s time for high-octane fun on Radiator Springs Racers to see who is the fastest racer in Ornament Valley!

Over at Pixar Pier, you’ll discover a whimsical boardwalk. Grab a pair of 3D glasses and join Woody, Buzz Lightyear, Jessie and the rest of the gang for an exhilarating spin on Toy Story Midway Mania. You can also join the Parr family for an incredible, high-speed adventure on the Incredicoaster. Pixar Pier is also the perfect place to spot some Pixar pals! 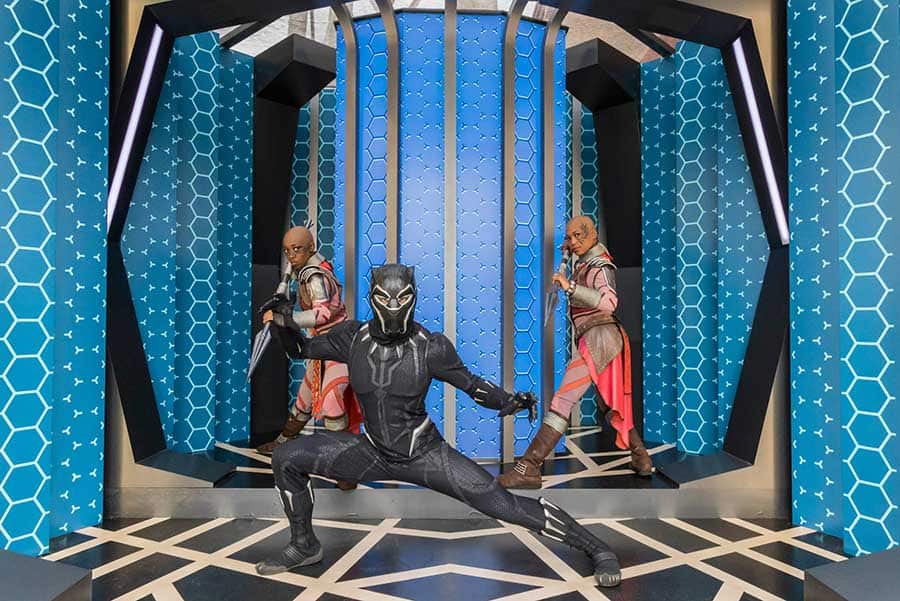 Assemble with Avengers in Hollywood Land

Throughout the day in Hollywood Land at Disney California Adventure park, cheer for some of Earth’s Mightiest Heroes, including Black Widow, Captain America, Thor, Spider-Man, Black Panther and the Dora Milaje, as they strike heroic poses from the Hollywood Backlot Stage. These Super Heroes will then be regular visitors at Avengers Campus, when the new land opens on June 4.

We hope to see you back at the parks, making special memories in new ways.

*Access to a Star Wars: Rise of the Resistance boarding group is subject to availability and not guaranteed. In order to give as many Guests as possible the opportunity to join the Resistance, each Guest can enter the virtual queue no more than once per day.

As a reminder, only Guests with a valid admission into Disneyland Park will be able to experience Star Wars: Rise of the Resistance, subject to availability. Distribution times are subject to change or cancellation.