Welcome to Disney’s Hollywood Studios where “Lights. Camera. Action!” take center stage! The past few years have brought several changes to Hollywood Studios which have made many Disney fans feel, due to the large amount of construction, this used to be a half-day park. That sentiment is certainly no longer true. These changes at Hollywood Studios have all been for the better however as Disney is now unleashing new and exciting experiences that are making everyone stop in their tracks and take notice! As you plan to embark on your Hollywood Studios day, here are a few things to know before you go.

The first-ever Mickey Mouse-themed ride-through attraction opened on March 4, 2020! The attraction features a new original story and catchy theme song as it takes guests on a journey inside the wacky and unpredictable world of Disney Channel’s Emmy Award-winning “Mickey Mouse” cartoon shorts. Inspired by the Mickey Shorts on the Disney Channel, Mickey and Minnie’s Runaway Railway is a collaboration between the people who bring the shorts at Disney Television Animation and Walt Disney Imagineering. Some people still might be mourning The Great Movie Ride, but we absolutely love it! This is a fun family attraction that will appeal to many more people than the old classic movies. Click here to learn more and read our review of this fun attraction!

2 – Star Wars: Galaxy’s Edge is Out of This World

Thursday, August 29, 2019, was an epic day at Disney’s Hollywood Studios! This was the day “Phase 1” of the newest land, Star Wars: Galaxy’s Edge opened to guests including the attraction, Millennium Falcon: Smugglers Run. “Phase 2” opened on December 5, 2019, which included the opening of the second attraction, Star Wars: Rise of the Resistance. This 14-acre land is the most popular place to be in all of Walt Disney World. With two new attractions, dining options, and shops – everyone (Star Wars fan or not) have been impressed at the immersion of this galaxy right within Hollywood Studios! Click here for everything you need to know about Star Wars: Galaxy’s Edge.

And we thought Toy Story Land which opened in June 2018 was impressive enough! Star Wars: Galaxy’s Edge is riding on the coattails of Toy Story Land, but this doesn’t mean planning for Toy Story Land isn’t important. Toy Story Land is still a popular place with crowds still sprinting towards Slinky Dog Dash first thing in the morning. With three attractions and Woody’s Lunch Box, it’s 11 acres (compared to Galaxy’s Edge’s 14 acres) is still without a doubt worth the time. Drop by again at night to see the lights glow in Andy’s backyard.

4 – Seriously Consider Paying for Access to the Lightning Lane for Star Wars: Rise of the Resistance

If you want to ensure you’ll get to enjoy Star Wars: Rise of the Resistance, you’ll want to seriously consider paying for access to the new Lighting Lane (formerly FastPass lane). At each theme park, there are two attractions that fall into the “Individual Lightning Lane” category. These are the most popular attractions. These attractions are NOT included with your Genie+ purchase and must be purchased separately. Lightning Lane selections for the top-tier individual attractions are made on the same day of your visit. Star Wars: Rise of the Resistance is one of the two Individual Lighting Lane attractions at Disney’s Hollywood Studios. The price for Rise of the Resistance has been consistently at the high end and will likely cost anywhere from $20-$29 per person, per day. It also has been the most popular and almost always “sells out” on any given day. Because the attraction shuts down somewhat regularly, Disney has even closed the regular stand-by queue, to ensure that guests paying for Lighting Lane can ride the attraction. So if you don’t pay for Lighting Lane, there is a chance you will not be able to ride the attraction by waiting in the regular line. That is the main reason we suggest considering paying for access if you have your heart set on enjoying this attraction.

Access to purchase Lightning Lane for the individual top-tier attractions are available to all guests when the park that attraction opens. Guests staying on Disney World property receive the benefit of early access to top-tier reservations and can make their purchases at 7:00 am on the day of their visit. If you are willing to pay for Lightning Lane access for this attraction, your best bet is to be a Disney resort guest and make your purchase right at 7:00 am. If you are not a resort guest, you need to make your purchase as soon as the park opens, but be aware that on really busy days, the Lightning Lane will fill to capacity before park opening. 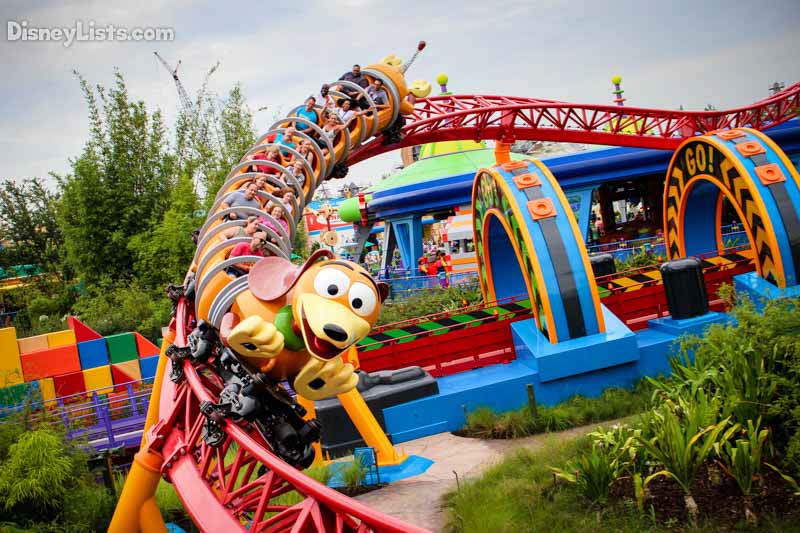 If you haven’t already, go ahead and download the My Disney Experience (MDE) App. This app will be your park map, times guide, reservation/food ordering option, and numerous other things while in Disney’s Hollywood Studios, including the easiest and the only way for you to make your selections for Disney Genie+ and Individual Lightning Lane attractions.

We’ve been talking so much about Toy Story Land and the preparation of Star Wars: Galaxy’s Edge, that we feel we must turn our focus to the must-hit shows you can find at Hollywood Studios! The timeless, “tale as old as time”, Beauty and the Beast – Live on Stage, is by far our favorite show at Studios. We also recommend the Frozen Sing-Along Celebration and the classic Indiana Jones Stunt Spectacular.  Check your MDE App for showtimes which are usually between late morning and early evening.

It seems like there is a new character strolling into Hollywood Studios each day! You can find Olaf, Mickey and Minnie, and more throughout the parks. Star Wars characters will be in full force, including Stormtroopers, Darth Vader, Kylo Ren, Chewbacca, and BB-8. If you have a little one who loves Disney Junior, they can meet a few Disney Jr. favorites near the Disney Junior Dance Party, including the  arrival of “Fancy Nancy.”

8 – Forget the Diet – A Foodie’s Paradise

Hollywood Studios has stepped up its “eats” game! You may know they have some of the best-themed dining on Disney property including fun table service spots like 50’s Prime Time Café and Sci-Fi Dine-In Theater Restaurant. But they’ve also become a foodie’s paradise with multiple quick-service spots offering decadent sweet and salty treats to match whatever the taste buds are craving! Get ready to eat plenty and drink your share as menus are constantly changing and being enhanced with dining favorites. Just don’t forget to make your table-service reservations 60 days in advance as space does go fast. If you’re going the quick-service route – Mobile Order from your MDE app to avoid the lines.

There are two nighttime spectaculars at the park. A nighttime spectacular called “Wonderful World of Animation” takes guests on a journey of over ninety years of animation. It’s a short, fun projection show at the Chinese Theater. Then, of course, there is the beloved “Fantasmic!” show and fireworks located in the amphitheater off Sunset Blvd that is not to be missed.

10 – Arrival via the Disney Skyliner

Have you thought about how you’ll arrive at Disney’s Hollywood Studios? Complimentary bus transportation is available from all Disney Resorts. Complimentary boat transportation is readily available from close-by Disney resorts. Another great new option is the Disney Skyliner – a gondola-style transportation system – that transports guests to and from Hollywood Studios and Disney Resorts including Art of Animation, Pop Century, Caribbean Beach, and Riviera Resort. Will you be taking to the sky? Click here for everything you need to know about the Disney Skyliner!

We have had a long time love affair with Disney. We love the magic and the memories we've made at Walt Disney World! We follow all things Disney and have great experiences with being Annual Passholders, Disney Vacation Club Members, and RunDisney participants. From lodging to dining to Genie+ we have a spreadsheet for every occasion. Usually there isn’t a day that passes without some discussion of the master plan of our next trip to the happiest place on earth. Most people think we’re normal – until they travel to Disney with us.
Disneylists.com Newsletter
Follow us on Facebook
Find us on Facebook
Follow Us on Instagram
Two huge mosaic walls based on the Disney•Pixar