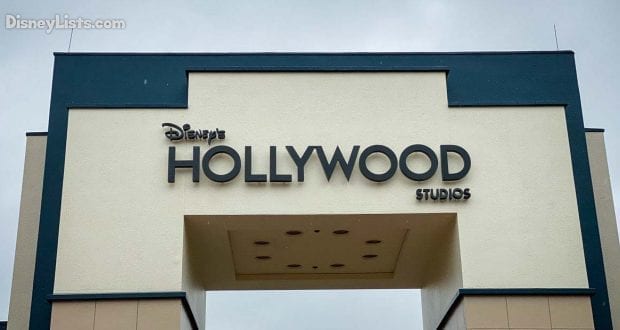 Transformation of Hollywood Studios – Past, Present, and Future

1 – A Look Behind the Curtain

On opening day, the park gave guests a behind-the-scenes look at moviemaking. Many of the Tinseltown icons that debuted May 1, 1989, remain, such as re-creations of the Chinese Theatre and The Hollywood Brown Derby. The park celebrated film, music, and theater, and took its inspiration from the Golden Age of Hollywood. The park’s name, Disney-MGM Studios, was derived from an agreement Disney had with Metro-Goldwyn-Mayer another film studio and gave Disney the ability to celebrate many films from MGM’s catalog in the Great Movie Ride. For a short time, the park held a satellite animation studio for Walt Disney Animation. The backlot tour celebrated films and movie making, and The Magic of Disney Animation gave guests a look behind the scenes at the animation studio. After almost twenty years, the park’s identity started to shift from focusing on movie making to a new direction that offered attractions inspired by Hollywood Stories. The park was renamed Disney’s Hollywood Studios in 2008. 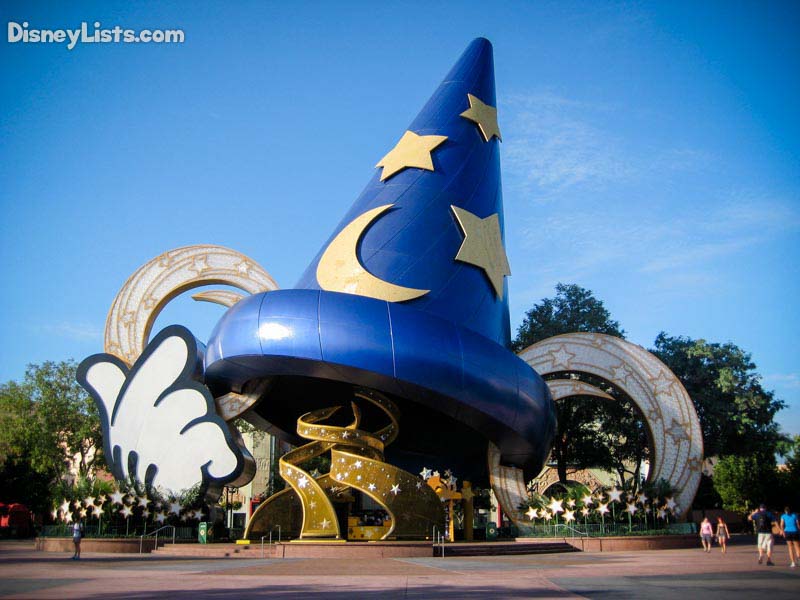 While the park had been moving slowly away from what was intended to be an actual working studio where guests could explore the process of bringing movies to life, the announcement of Toy Story Land and Star Wars Land cemented the park’s evolution to a new experience.

Change is a funny thing, and many people reacted differently to the closures that soon followed. Before the closures were announced in 2015, nearly everyone was complaining that Disney’s Hollywood Studios needed some significant changes. Attendance was down, and people routinely referred to it as a “half-day park.” While we loved visiting the park at that time, we agreed that something needed to happen to breathe life back into the park. But once the closures started taking place, such as the closing of the Backlot Tour, the Stunt Show, and especially the Great Movie Ride in 2017, people complained that changes were being made to the park. That’s the challenge with change. Everyone agrees that the old, tired stuff needs to go, but leave the good stuff alone. The problem is, everyone has different opinions on what belongs in each group.

In 2019, at the 30th Anniversary celebration, the park’s new identity was further cemented with the reveal of a new logo featuring Disney’s three major franchises: Toy Story, Mickey Mouse, and Star Wars. The reaction was mixed. Some continued to miss the old “MGM,” while others loved the logo and the new direction of the park.

Sure, there are several experiences we miss at Hollywood Studios. We had our favorites and were disappointed with some of the changes, just like everyone else. But the alternative is a park that falls further and further behind new ideas and new dreams, and slowly dies. New ideas and new dreams, by their very nature, inspire change. This is something Walt understood and was central to his vision of a place that would never be complete. The world inspired by Walt Disney would always be in the process of becoming.

The park has evolved into a place that envelops guests in even more immersive experiences. We love Disney’s Hollywood Studios and visit more now than we ever did before. There is so much the park has to offer, and there are still many exciting projects in the works. Here is a rundown of the recent significant additions to the park.

In the summer of 2018, Toy Story Land opened to much fanfare. The land itself is fantastic. Woody, Jessie, Buzz, and other fun-loving characters from Pixar Animation Studios’ Toy Story welcome guests to Toy Story Land, where they feel like “honorary toys” in the larger-than-life outdoor setting of Andy’s backyard. You’ll find giant-sized toys, nods to your childhood that offer up some serious nostalgia, and three great attractions. You can experience the family-friendly roller coaster Slinky Dog Dash, take a spin on Alien Swirling Saucers, and enjoy the 4D fun of Toy Story Mania! Woody welcomes you into the land, Jessie and Rex, peer down from Slinky Dog Dash, and Buzz and the Green Aliens offer serious space fun. And now, Bo Peep from Disney and Pixar’s “Toy Story 4” makes appearances in Toy Story Land! There is some serious love for the Toy Story franchise, and this land embodies that perfectly.

At Lightning McQueen’s Racing Academy, guests learn what it takes to be a champion racer. Lightning McQueen, star of Pixar’s Cars films, uses state-of-the-art technology and a massive wraparound screen to teach the rules of the road as guests become rookie racers in this new show experience. This is a fun family experience. Click here to learn all about this new attraction.

No land opening was more anticipated than Star Wars: Galaxy’s Edge. This newest land in Disney’s Hollywood Studios opened late August in 2019. Disney opened the park in two phases: the land and one of the anchor attractions, Millennium Falcon: Smugglers Run in August. The second phase was the technologically advanced attraction, Star Wars: Rise of the Resistance on December 5, 2019.

With the opening of Star Wars: Rise of the Resistance, Star Wars: Galaxy’s Edge is complete. It is an expansive and immersive experience that transports guests to the distant planet of Batuu, where you can live out your own Star Wars adventures inside a 14-acre land. You join a climactic battle between the Resistance and the First Order in Star Wars: Rise of the Resistance and take the controls of the most famous ship in the galaxy in Millennium Falcon: Smugglers Run. You can build your own droid or craft a lightsaber, discover exotic food and drink, and explore Black Spire Outpost in search of rare antiquities. 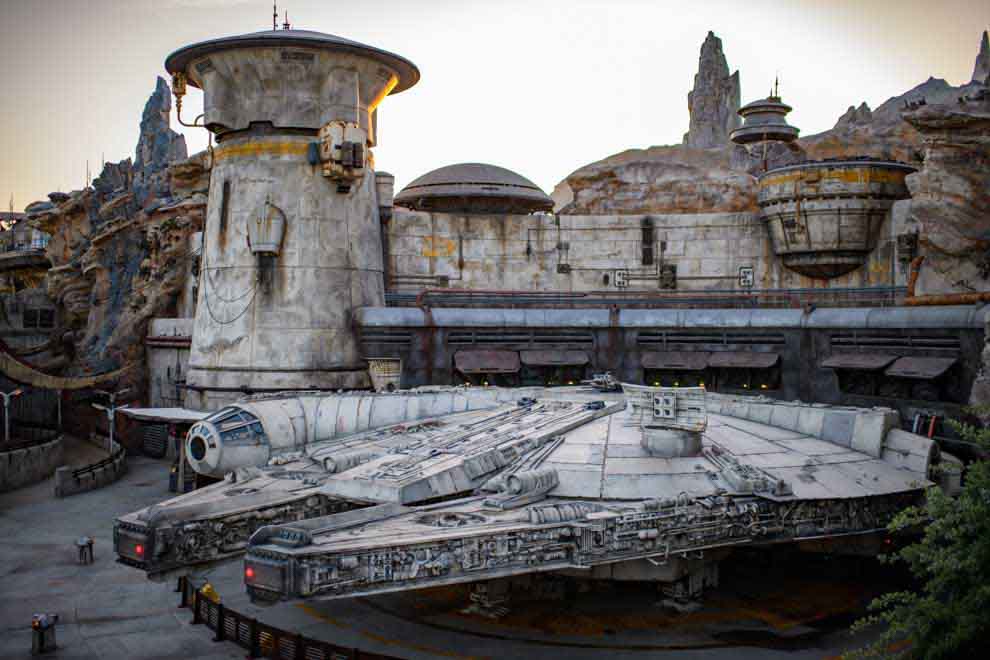 For many traditional Disney fans, the world of Star Wars is truly a galaxy far, far away. However, we’ve heard from and spoken to so many people who, while they appreciate Disney, are much bigger Star Wars fans. Those folks feel excited that Disney World now has something that they’re really passionate about. We agree. As much as we love Disney animation, from the classics right up to the most recent Pixar release, we’re glad that there’s something for everyone. Disney World is big enough to be a place where any dream comes true, no matter what world guests dream of.

Imagine being inside a Mickey Mouse cartoon short! Anything can happen aboard Mickey & Minnie’s Runaway Railway, where guests burst through the Chinese Theatre movie screen and join Mickey Mouse, Minnie Mouse, and pals on a wacky adventure. This first ride-through attraction themed to Mickey Mouse and Minnie Mouse features dazzling visual effects, a lovable theme song, and surprising twists and turns that is fun for the entire family.

The attraction has had nothing but rave reviews from guests since its opening. No matter what your opinion on the new style of animation of the Mickey Shorts, anyone who loves Mickey Mouse will enjoy this attraction. The theme song is catchy, and the story is fun, and the attraction involves fun thrills for the whole family. We really think kids, in particular, will absolutely love it. We know many mourn The Great Movie Ride, but this attraction is all about placing you inside the world of a Mickey Short. Children can connect easily with Mickey and friends. They probably had no idea who Humphry Bogart is or the other films that were featured in the Great Movie Ride. This attraction is a worthy replacement, and we are overdue for a Mickey-themed attraction. We really hope people will give it a chance. 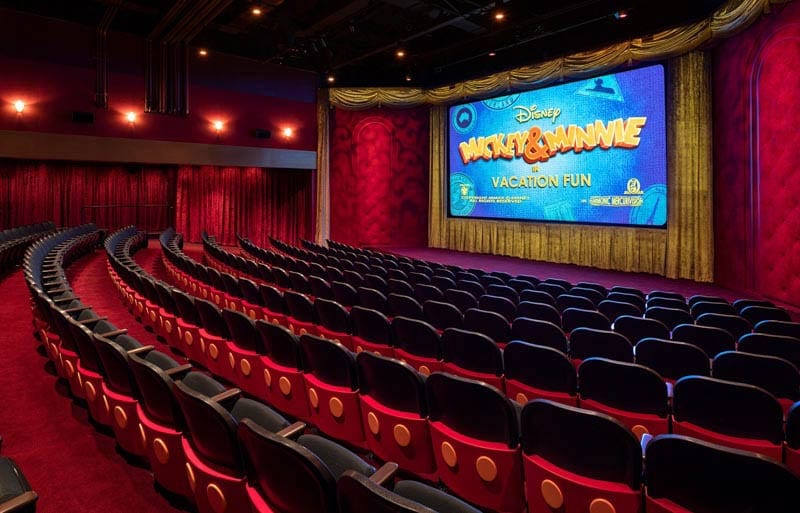 Mickey Shorts Theater in Disney’s Hollywood Studios shows an original short film in the style of the popular Disney Channel animated series “Mickey Mouse,” and features photo-opportunity locations for guests. Check out the photo above that shows the interior of the theater, including fun Mickey Mouse-themed seats. We love the idea of a “theater district” and think this will be a fun (and air-conditioned) place to catch up on the latest Mickey Short. The Short is fun and well worth catching during your trip to Disney’s Hollywood Studios.

To easily access all this fun and excitement, you can float into Disney’s Hollywood Studios aboard the new Disney Skyliner, a state-of-the-art gondola system now connecting the park (and Epcot) to four Disney resort hotels. Soaring along the treetops of Walt Disney World Resort, you’ll discover views never seen before as you prepare to let your adventures begin at the newly transformed Disney’s Hollywood Studios. 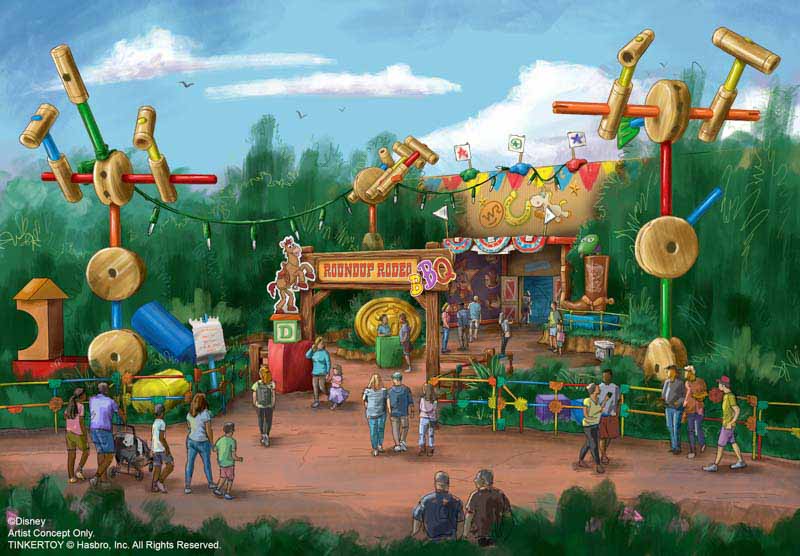 Roundup Rodeo BBQ is a new table-service restaurant coming to Toy Story Land in 2020 as guests live their adventures together at Disney’s Hollywood Studios at Walt Disney World Resort. This artist concept image exemplifies how guests will be immersed with all their toy pals in a fun, family-friendly environment constructed from Andy’s favorite larger-than-life play sets and games. (Credit: Disney)

Roundup Rodeo BBQ is a new table-service restaurant coming to Toy Story Land. The concept image above exemplifies how guests will be immersed with all their toy pals in a fun, family-friendly environment constructed from Andy’s favorite larger-than-life playsets and games. We’re so excited about this restaurant. A valid complaint of Toy Story Land is that there is very limited seating at Woody’s Lunch Box and in the land itself. We can’t wait to sit down for a table service meal in Toy Story Land!

11 – To Infinity and Beyond

We love being able to step inside those worlds and live out those adventures with our loved ones. We really think the park’s transformation has been for the better. The park is packed, and there is so much to do. No longer a half-day park, you need at least two days to really enjoy everything the park has to offer.

“From the early days of making movies to today’s focus on engaging guests, putting them in the story, Disney’s Hollywood Studios has followed an amazing arc across three decades,” said Phil Holmes, vice president of the park. “I’m thrilled with its transformation and look forward to an exciting future. Given all the new and coming attractions, our message to guests is clear: let your adventures begin at Disney’s Hollywood Studios.”